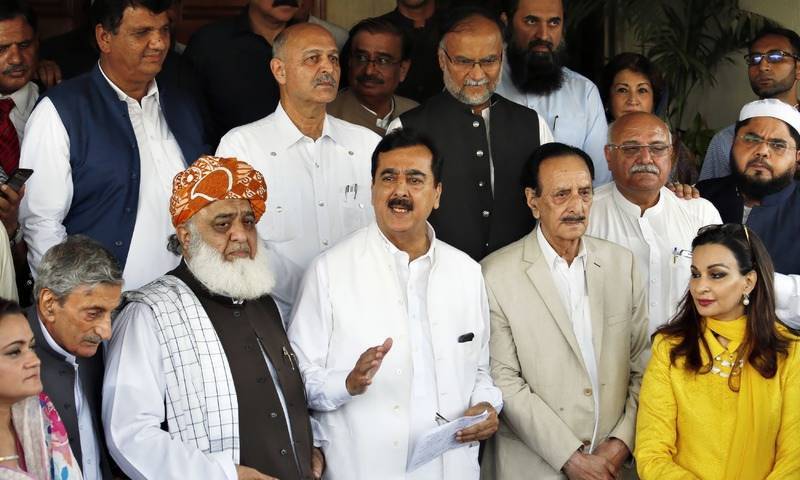 Islamabad (Staff Report): The opposition parties have announced to call another All Parties Conference (APC) on Thursday.

According to sources, the meeting is expected to be held at the residence of MMA leader Mian Aslam, however, it will be finalized later today.

The gathering will discuss names of the opposition’s candidates for the posts of prime minister, speaker and deputy speaker as well as finalise a strategy regarding the oath-taking of the MNAs-elect.

The sources added that the opposition’s strategy regarding protest inside and outside Parliament will also be discussed in the meeting.

The opposition parties will also discuss to bring a consensus candidate for the slot of opposition leader in the National Assembly.

On Monday, The senior leaders of opposition parties also held a meeting and decided to form a grand opposition for formulating a joint strategy on alleged rigging in the July 25 General Election.

Speaking to media after the meeting, MMA chief Maulana Fazlur Rehman said those stealing the mandate of masses should be ashamed of themselves.

Former prime minister and Pakistan Peoples (PPP) Yousaf Raza Gilani said that an all parties conference would be held soon, and a strategy would be formulated to take up the issue of rigging.

He added the alliance of these parties will play the role of a strong opposition inside and outside the Parliament.

The political leaders said that a grand opposition will issue a white paper over rigging during the elections and meet for an All Parties Conference in two days.

According to sources, political parties in Balochistan will also be taken into confidence over the grand opposition alliance.

On Friday, Pakistan Muslim League-Nawaz (PML-N) and Muttahida Majlis-e-Amal (MMA) on Friday held an All Parties Conference (APC) to discuss alleged rigging during the polling on July 25.

PML-N president Shehbaz and JUI-F chief Fazalur Rehman chaired the meeting. Both the leaders spoke to the media after presiding over the APC.

Addressing the press conference after the meeting, MMA chief Maulana Fazlur Rehman said many candidates were robbed of their mandate in the election.