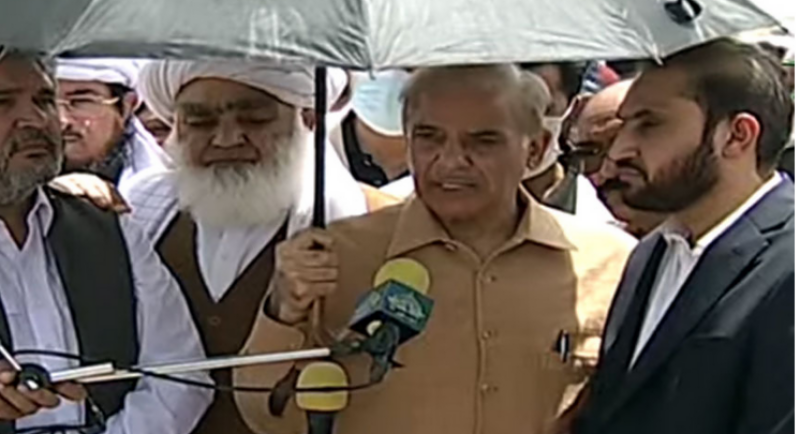 Quetta (Web Desk/Agencies): Prime Minister Shehbaz Sharif on Monday reviewed relief efforts in Balochistan and ordered authorities to distribute compensation money to those affected by the rains and floods within 24 hours.

As per the latest details issued by the Provincial Disaster Management Authority (PDMA), 136 people were killed, including 56 men, 47 children, and 33 women, while 70 people have been injured.

The premier issued the directive during his visit to the tent city in the Khusnob area of Qila Saifullah district, saying that negligence over relief and rescue operations would not be tolerated.

Talking to journalists, PM Shehbaz expressed regret over the plight of displaced persons who faced unavailability of edible items at relief camps and were left with no other option but to travel back to their homes to get food.

He said loopholes had been identified regarding the lack of a record-keeping system at the medical relief system at camps and stressed addressing the issue at the earliest.

PM Shehbaz expressed grief over the death of eight children at the relief camps and extended condolences to their families over their loss.

He also directed the authorities concerned to ensure the disbursement of compensation money to the flood-affected people of Balochistan within 24 hours.

PM Shehbaz mentioned that torrential rains led to heavy loss of lives and infrastructure in Balochistan, for which the federal government was determined to extend every possible assistance to the provincial government.

Chief Minister Balochistan Abdul Quddus Bizenjo said though the provincial government had ensured the availability of food rations for one month for the tent city, however, said, an inquiry would be conducted to find out the case of unavailability of food and water at the relief camps.

He said the district commissioner of any flood-affected area, where negligence was reported, would be suspended immediately.

Federal Minister for Housing Maulana Abdul Wasay said the government would make every effort to rehabilitate the displaced people due to floods.

It was informed that four camps with medical facilities had been set up for flood-affected people and a tube well system in the area was functioning with solar energy to meet the water needs.

It was highlighted that in 30 years, Balochistan witnessed an average of 500 percent more rains after the pre-monsoon spell commenced on June 13.

The briefing told that so far, 136 deaths had been reported with 70 injured. As many as 1,100 persons received minor injuries and were given first-aid.

Around 200,000 acres of agricultural land were inundated while 20,500 people were shifted to safe places. Also, the connectivity of Motorway M-8 and the Quetta-Karachi national highway was restored.

Later at the Quetta Airport before his departure for home, the prime minister vowed collective efforts to ease the sufferings of the flood victims of Balochistan.

He directed the authorities concerned to expand the network of medical camps across the flood-hit areas and ensure the availability of vaccines and medicine for the livestock.

Prime Minister Shehbaz Sharif arrived in the provincial capital of Balochistan on a day-long visit to oversee relief operations in the flood-affected areas.

According to the PDMA, 136 people have lost their lives in rain-related incidents in Balochistan between June 1 and now while 70 others have been injured in similar accidents during this period.

Meanwhile, several roads and bridges were washed away by floods, the PDMA said on Monday, adding that a bridge connecting Lasbela and Sindh, which was damaged seven days ago, had not been repaired yet.

Roads linking Quetta to Ziarat, Chaman and Sibi had also been affected by rains, the authority said.

It said rains had caused damaged to 13,535 houses in the province since June 1, among which 10,129 were partially damaged and 3,406 were completely destroyed.

The PDMA said relief activities were under way in the province.