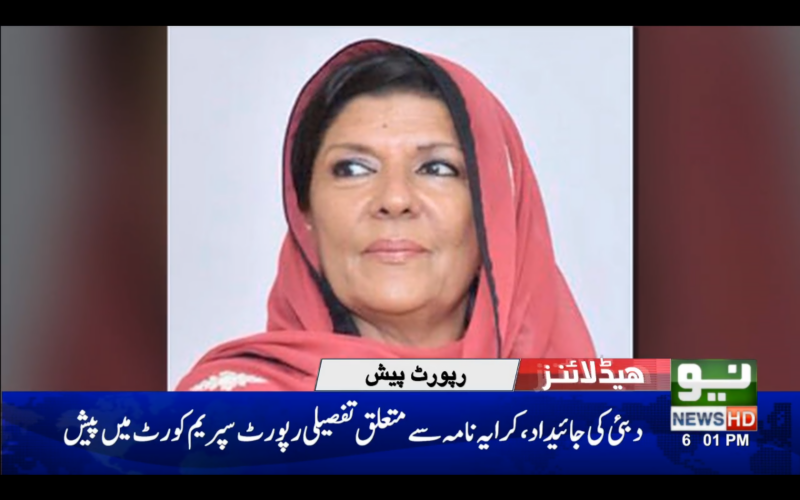 Lahore: (Staff Report): The Supreme Court (SC) on Saturday ordered that investigation against Prime Minister Imran Khan’s sister, Aleema Khan, be made part of the record after the land revenue board commissioner informed that she did not seek tax amnesty on her Dubai property.

On Friday, the Supreme Court, during the hearing of suo motu case regarding foreign properties of Pakistani nationals, had directed the Federal Board of Revenue (FBR) to present property and tax amnesty details of Aleema Khan.

During today’s hearing, Land Revenue Board Commissioner Dr Ishtiaq Ahmed presented a report on Aleema Khan’s properties and said she did not seek tax amnesty on her apartment in Dubai.

He told the court that Aleema Khan was issued a notice on February 8, 2018 for not declaring the property. He added that Aleema could not comply the notice as she was out of the country at the time.

Dr Ishtiaq Ahmed further told the bench that Aleema Khan took loans from a bank to purchase the property which was repaid through the rent earned on it.

Ordering that the investigation be made part of the record, the top court adjourned the hearing of the case till December 6.

Earlier on Friday, Aleema Khan said that she will respond to all the queries regarding her properties when she is summoned by the Supreme Court.

The PM’s sister further said that she’s “not a public office holder but a private citizen” and “will reply where she has to”.

She said that she was being asked where she got the money from to buy the properties. “I inherited this money from my maternal and paternal grandfathers as well as my parents and even earned myself,” she said.

The PM's sister termed the allegations against her as hurtful and said even her father was also accused of corruption that was painful. She further said that Imran “always opposed accumulating money”.

According to officials, Aleema Khan deposited half the total cost of her previously undeclared Dubai property with tax authorities as penalty.

She paid 25 per cent of the total estimated amount of her luxurious flat, "The Lofts East-1406", in taxes and 25 per cent fine charges.

The prime minister's sister was slapped with a double penalty (taxes and fine) because she did not disclose the said property worth around Rs74 million, the officials had said.

Tajik president to reach Pakistan on Wednesday for two-day visit