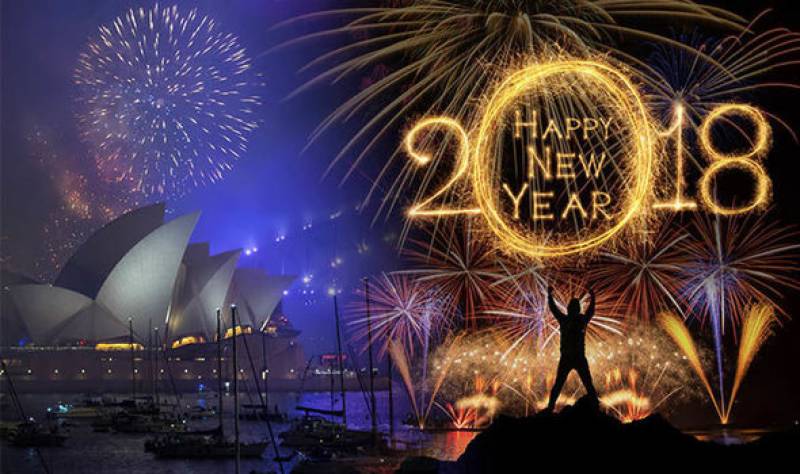 Spectacular feats of fireworks at Bahria town Icon Tower in Karachi, Bahria's Eiffel tower in Lahore and Bahria Enclave in Islamabad were the most prominent of all celebrations held across the country.

Musical concerts were arranged at a number of places across the countries to celebrate new year's night which was attended by youngsters in a very large number.

The moment when the clock struck 12, fireworks lightened up the skies.

Hong Kong saw in 2018 in spectacular style as the southern Chinese city staged a stunning fireworks display over its famous Victoria Harbour.

Thousands thronged the harbourside to see the show illuminate the famous skyline as revellers danced to Auld Lang Syne.

"Shooting stars" were also fired from the rooftops of skyscrapers in a 10-minute musical fireworks display.

In the Indonesian capital Jakarta, hundreds of couples attended a free mass wedding provided free by the authorities.

"I am very happy," Aminah, who only goes by one name, told sources. "I´m happy because it´s for free and now I have all the legal documents which I have never had before, thank God."

Three hours earlier Australia rang in the New Year with a spectacular display of rainbow-coloured fireworks cascading from Sydney Harbour Bridge, as partygoers marked the nation´s legalisation of gay marriage amid tight security.

About 1.5 million people packed the city´s seafront to watch the pyrotechnics light up the sky above the historic bridge and the iconic opera house, the first major celebrations worldwide after New Zealand.

"This is a fabulous way to see out 2017 -- the year that four out of five Sydneysiders said a resounding ´Yes´ to marriage equality," said Sydney Lord Mayor Clover Moore of the nationwide postal vote in support of change.