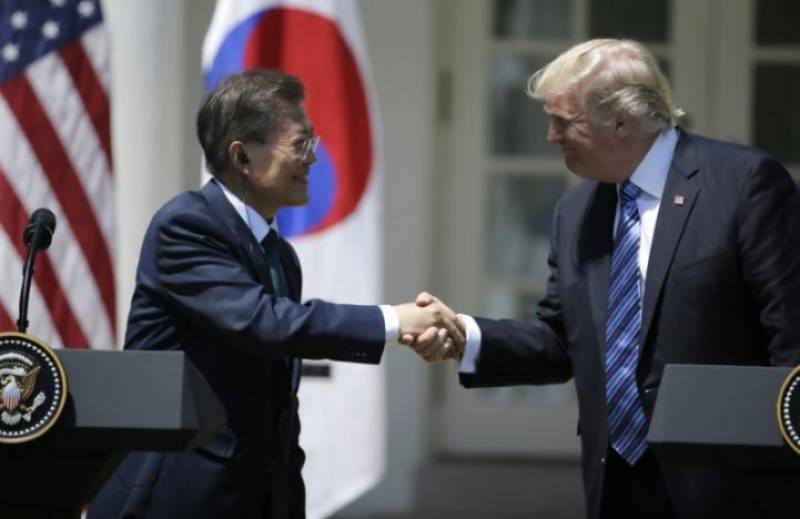 Washington (Reuters): U.S. President Donald Trump called for a determined response to North Korea after talks with South Korea's President Moon Jae-in where he stressed the importance of their alliance but took aim at Seoul over trade and sharing the cost of defense.

Trump said the United States was renegotiating what he characterized as a "rough" trade deal with South Korea agreed to five years ago by his predecessor, Barack Obama, and reiterated that an era of "strategic patience" over North Korea's nuclear and ballistic missile programs had ended.

"Together we are facing the threat of the reckless and brutal regime in North Korea," Trump said as he stood alongside Moon in the White House Rose Garden. "The nuclear and ballistic missile programs of that regime require a determined response."

Despite the tough rhetoric, it remains unclear how Trump will find a way forward on North Korea, which is working to develop a nuclear-tipped missile capable of hitting the United States.

U.S. Defense Secretary Jim Mattis has warned the consequences of any military solution would be "tragic on an unbelievable scale." Trump had pinned his hopes on persuading China, North Korea's neighbor and main trading partner, to do more to rein in Pyongyang, although he has lately grown frustrated that Beijing has not taken stronger action.

Trump called on regional powers to implement sanctions and demand North Korea "choose a better path and do it quickly."

Moon, who warned of a "stern response" to any provocations, urged Pyongyang to return promptly to talks.

"Our two leaders will employ both sanctions and dialogue in a phased and comprehensive approach," Moon said of South Korea and the United States.

Trump and Moon have said they are open to renewed dialogue with North Korea but only under circumstances that would lead to Pyongyang giving up its weapons programs.

Moon told an event at the Center for Strategic and International Studies think tank that moves by North Korea that could create conditions for dialogue could include a freeze on its nuclear and missile tests, or the release of three Americans it is holding in the country.

To be successful, talks would have to involve North Korean leader Kim Jong Un and have as their ultimate aim the complete dismantling of North Korea's nuclear program, he added.

Trump sought to woo China since a summit with Chinese President Xi Jinping in April but the honeymoon period appears to be over. On Thursday, the United States targeted a Chinese bank and sanctioned Chinese individuals and a firm for dealing with North Korea and approved a $1.42 billion arms deal with Taiwan - decisions that angered Beijing.

South Korea is a long-standing American ally but Trump has spoken harshly about U.S. trade imbalances and threatened to tear up the bilateral trade pact.

"We will do more to remove barriers to reciprocal trade and market access," Trump said, adding that the two leaders had talked about the thorny trade areas of steel and autos.

Trump said he was encouraged by Moon's assurances that he would seek a level playing field for American workers and businesses, particularly automakers.

A joint statement said the two sides had agreed to work together to reduce over supply of basic materials such as steel and non-tariff barriers. It also said Trump had accepted an invitation from Moon to visit South Korea this year.

Bonnie Glaser, senior adviser for Asia at the Center for Strategic and International Studies think tank, said it was unwise for Trump to air the trade issue so publicly.

"Public complaints by Trump about unfair trade and inadequate defense spending provide opportunities for China and North Korea to drive a wedge between the allies," she said.

Trump also emphasized the need to ensure equitable sharing of costs for defense, returning to a theme he raised during his campaign and brought up with other allies, including NATO countries and Japan.

A senior U.S. official said in a briefing before the president's meeting with Moon that South Korea was in many respects a "model ally," given its spending of 2.7 percent of GDP on defense and Moon's plan to grow capabilities.

"We shouldn't view South Korea as somehow laggard on that front," the official said on condition of anonymity.

The U.S. goods trade deficit with South Korea has more than doubled since the U.S.-Korea free trade pact known as KORUS took effect in 2012. The agreement was forecast to boost U.S. exports by $10 billion a year, but in 2016 they were $3 billion lower than in 2011.

At the start of Friday's talks, U.S. Commerce Secretary Wilbur Ross said the largest component of the deficit was automotive trade and many non-tariff barriers to U.S. auto exports to South Korea remained.

Ross said later on Friday that some progress had been made in the talks.

The current pact was agreed to despite protests by supporters of Moon, who was then in opposition. But analysts have suggested that given the need to preserve a unified front in the face of a hostile North Korea, there could be compromise on both sides to resolve issues.

US missile attack on Syria: Russia calls for UNSC meeting