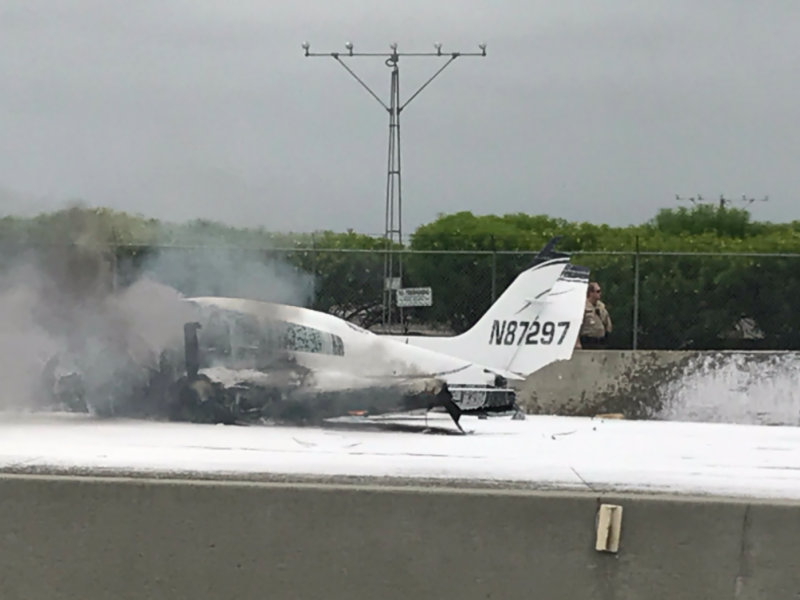 Irvine (Web Desk): A small, twin-engine plane crash-landed on the I-405 freeway during the tail-end of rush-hour, banging into the center divider, colliding with a car, scattering debris that at least three other vehicles couldn’t avoid and ultimately erupting in flames that charred the roadway.

The 55-year-old female passenger staggered out of the six-seat plane. The 62-year-old male pilot was pulled from the cockpit by an off-duty firefighter. Both had traumatic injuries, Orange County Fire Capt. Larry Kurtz said, and they were taken to Orange County Global Medical Center in Santa Ana.

“This could have been extraordinarily bad,” said Kurtz, noting that the pair, apparently a married couple, were conscious and had good vitals when first responders arrived.

Somehow, no one driving on the notoriously busy I-405 was injured.

The Cessna 310R left John Wayne Airport, where it is based, to head to an unknown destination. But the plane ran into trouble soon after, forcing the pilot to turn back – and try to make it back to John Wayne, said Ian Gregor, a spokesman for the Federal Aviation Administration.

Just saw the craziest thing on the 405 near John Wayne airport. Thankfully they're saying everyone on the plane is alive ????????@ABC @CNN @MSNBC pic.twitter.com/auVd9PbsVu

“Your landing gear appears to be up,” a male voice replied.

#PlaneCrash on the 405 near Orange County's John Wayne Airport pic.twitter.com/PD2nPPBiUb