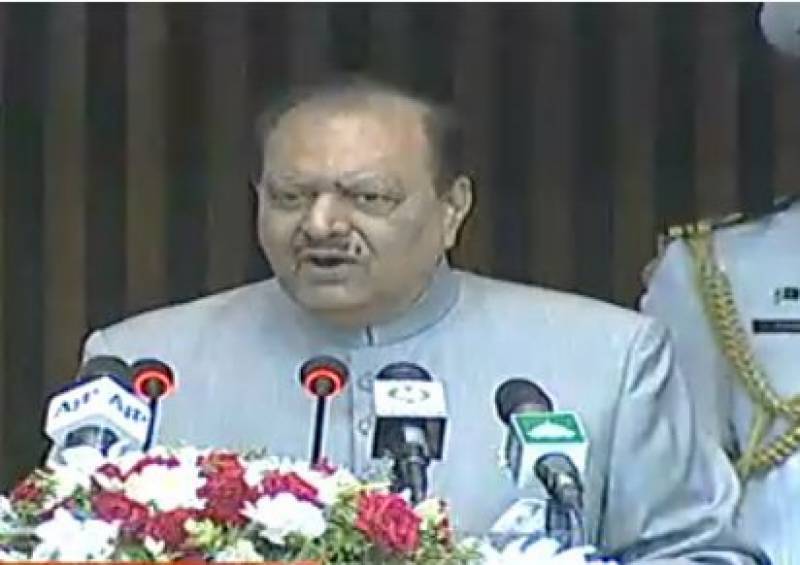 Islamabad (Web Desk): Pakistan President Mamnoon Hussain, addressed to the joint session of Parliament on Thursday, said "history will remember the performance of this House."

Immediately after the president began his speech, opposition began shouting anti-government slogans “Go Nawaz Go” to register their protest against the federal government.

During his speech the president also praised the government's economic policies, as well as the recently proposed federal budget.

He stated, the China Pakistan Economic Corridor (CPEC) will be a source of development for the entire region.

He said, "Kashmir issue is an unfinished agenda of Partition," adding that it can only be resolved in light of the United Nations' resolutions.

Condemning Wednesday's blast in Kabul president further said, "I invite the Afghan leadership to resolve our differences. We are with our Afghan brothers shoulder to shoulder in their time of need."

The president also expressed Pakistan's desire to enhance its ties with Russia, and praised the country's relationship with Turkey as well.

He also said measures are under way to end the feeling of isolation faced by Balochistan.

The president said, "Opposition shouldn't mar development of the country."

The president also commended the government's performance in terms of foreign affairs, highlighting the country's recent entry into the Shanghai Cooperation Organisation as a permanent member.