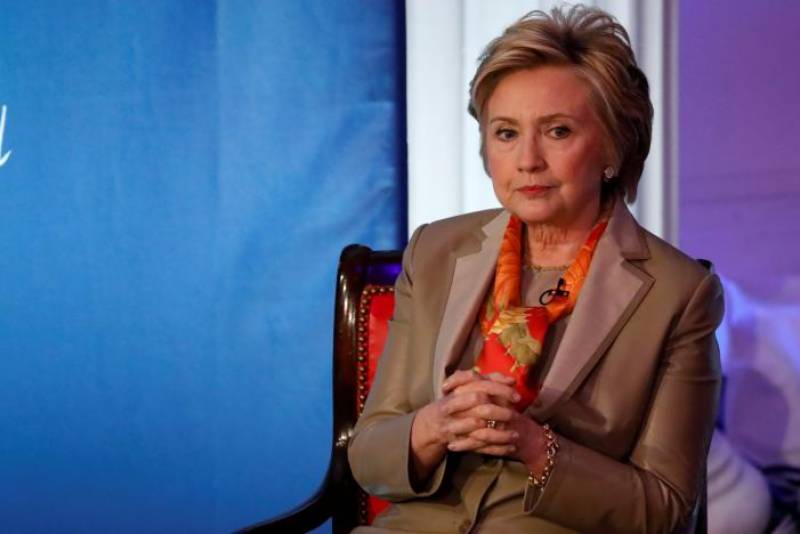 Washington (Reuters): Hillary Clinton said on Wednesday she suspects President Donald Trump's campaign gave guidance to Russian government propaganda efforts during last year's US presidential campaign, leveling her most serious charge yet against the person who defeated her.

The former Democratic presidential candidate, appearing at a tech conference near Los Angeles, said propaganda spread on sites such as Facebook helped cost her the election, and she urged Silicon Valley firms to move faster to stop false stories.

Trump has said there was no collusion between his campaign and Russia.

Echoing assessments of U.S. intelligence agencies, Clinton said the Russian government wanted to spread disinformation about her. But she added they "could not have known how best to weaponize that information unless they had been guided."

"Guided by Americans and guided by people who have polling and data," she responded.

Clinton was pressed by another journalist on stage, Kara Swisher, who asked: "But you're leaning Trump?"

"Yes, I think it's pretty hard not to," Clinton said.

She said there had been a "marriage" of people who spread false stories with Republicans who had detailed voter data.

It appeared to be the first time Clinton had accused Trump of collusion with Russians. Earlier this month, she blamed Russian hackers and then-FBI Director James Comey for costing her the election.

In a Twitter post on Wednesday night, Trump responded: "Crooked Hillary Clinton now blames everybody but herself, refuses to say she was a terrible candidate. Hits Facebook & even Dems & DNC."

In her appearance on Wednesday, Clinton slammed Trump's ability to create distractions using Twitter. "It's the circus, right? It's what a classic authoritarian does," she said.

Trump's administration has been dogged in its first months by allegations his associates had inappropriate contacts with Russian government officials. A special counsel, former FBI Director Robert Mueller, was appointed to lead an investigation after Trump fired Comey. Moscow has denied meddling in the U.S. election.

Clinton mentioned Facebook by name, saying the social media network was flooded with false information about her and that people were understandably misled. She said she would like to see Facebook curate its network more aggressively.

"I have a lot of sympathy at this point ... for people trying to make these decisions. I would just urge them to hurry up," she said.

Facebook Chief Executive Mark Zuckerberg said in November it was "crazy" to think that fake news on the site had influenced the election. Beginning in December, Facebook began introducing tools to try to prevent fake news stories from spreading.

Clinton said that in targeting voters online, she was at a disadvantage because the Republican Party provided Trump with an extensive database, through an organization called the Data Trust, that Democrats did not have.

"I inherited nothing from the Democratic Party," she said. "I mean, it was bankrupt. It was on the verge of insolvency. Its data was mediocre to poor, nonexistent, wrong. I had to inject money into it, the DNC, to keep it going."