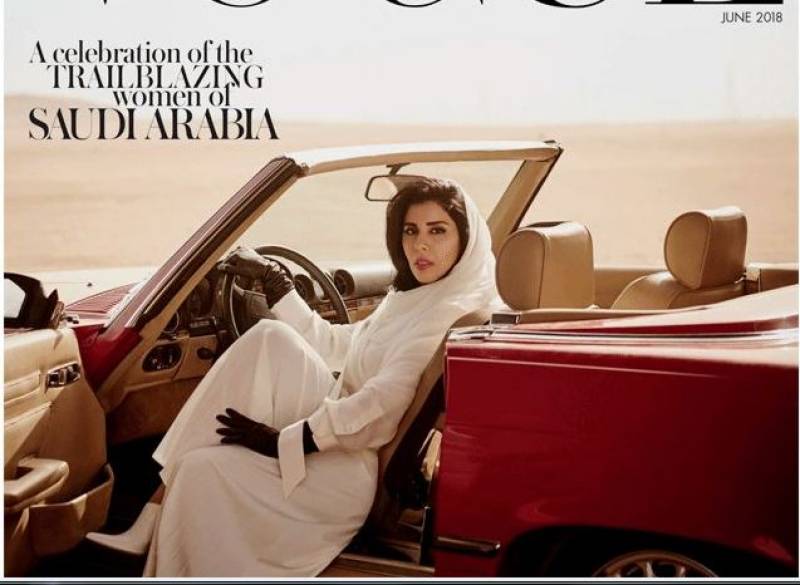 Riyadh (Web Desk): Vogue Arabia has been criticised for its June cover featuring a Saudi princess to celebrate the “trailblazing women of Saudi Arabia”.

But the image was criticised by campaigners protesting at the arrests in May of at least 11 activists, mostly identified by rights groups as veteran women campaigners for the right to drive and to end Saudi’s male guardianship system.

This June, the Kingdom of Saudi Arabia is putting women in the driving seat – and so are we. https://t.co/CaOwxsdQQI

At least four of those activists were released last week, Amnesty International said, but the fate of the others remains unclear. Reports in state-backed media branded some of the detainees traitors and “agents of embassies”.

Many on social media posted the Vogue cover with images of the detained activists photoshopped over the princess’s face.

#Saudi - Princess Hayfa bint Abdullah Al Saud shown behind the wheel on the cover of Vogue Arabia's June 2018 issue - the kingdom's ban on women driving will be overturned on June 24 Courtesy Vogue Arabia - why a princess & not ordinary female? pic.twitter.com/vkyTStx2q1

You've got to be kidding me. A princess graces the cover of next month's Vogue Arabia while @azizayousef @Saudiwoman @LoujainHathloul and other activist women who have worked tirelessly to lift driving ban languish in jail pic.twitter.com/gEmXh8sTHL

When I said Vogue Arabia needs to feature more ethnic Arabs on their covers - this is not what I meant. pic.twitter.com/djUbhDKBi3