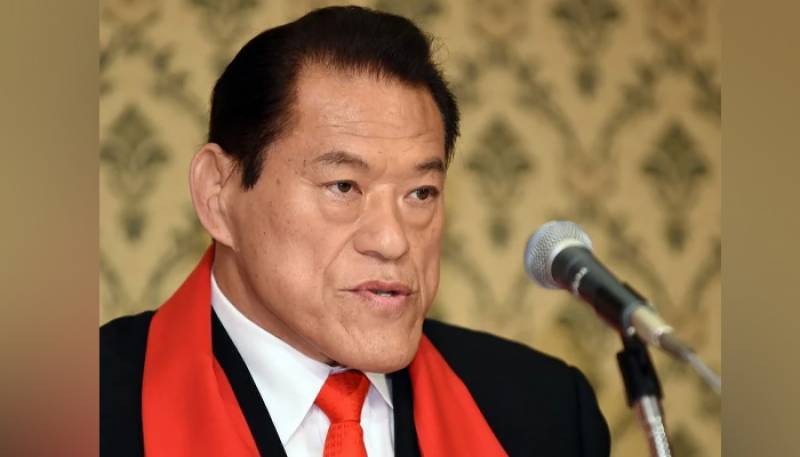 "New Japan Pro-Wrestling is deeply saddened at the passing of our founder, Antonio Inoki," the company he founded in 1972 said in a tweet on Saturday.

New Japan Pro-Wrestling is deeply saddened at the passing of our founder, Antonio Inoki.

His achievements, both in professional wrestling and the global community are without parallel and will never be forgotten.

Our thoughts are with Inoki’s family, friends and fans. pic.twitter.com/n8zA9hj78e

Six feet three inches tall Inoki was a pioneer of mixed martial arts in Japan, and shot to fame in 1976 for taking on world heavyweight champion Muhammad Ali in a zany wrestler-versus-boxer bout in Tokyo.

In 1989 Inoki entered politics, winning a seat in the upper house of Japan's parliament.

He travelled to Iraq prior to the 1990 Gulf War to gain the release of Japanese hostages.

Inoki lost his seat in 1995 and retired as a wrestler in 1998, but was re-elected to the upper house in 2013 as a member of another opposition party.

Having built a strong personal connection with North Korea over the years, travelled there dozens of times to help resolve the issue of Pyongyang's abductions of Japanese citizens during the Cold War, before ending his political career in 2019.

Inoki was very popular in Pakistan as well. In 1976, he was challenged by Pakistani wrestler Akram aka “Akki” and when he came to Pakistan for the encounter, he was surprised to see nearly 50,000 spectators turn up for the spectacle at the National Stadium Karachi.

After Jharra's death, Inoki supported the wrestler's nephew and brought him up in Japan under his supervision.

He returned to Pakistan in 2013 again as part of goodwill celebrations of 60 years of Pak-Japanese diplomatic relations.

The famed wrestler believed in peace between Pakistan and India and wished to go for a peace walk at the Wahga Border.

Prime Minister Shehbaz Sharif expressed his condolences to the family of the wrestling legend and the Japanese people, saying that Inoki "mesmerised a whole generation". PM Shehbaz also reminisced meeting the champion around a decade ago.

Sad to learn about the passing of legendary Japanese wrestler Antonio Inoki. I have a vivid memory of meeting him at a stadium in Lahore 10 years ago. He mesmerized a whole generation with his rare wrestling prowess. My condolences are with his family & Japanese people. pic.twitter.com/Drrzz2ZhfI