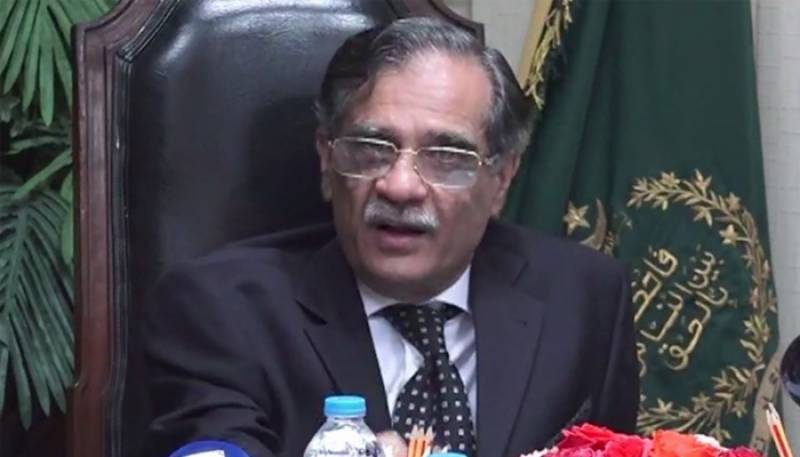 A bench headed by the chief justice at Supreme Court's Karachi Registry heard a suo motu notice taken against the PTI MPA over the physical assault of a citizen.

As the hearing went under way, the chief justice asked the MPA, "What were you thinking when you thrashed the citizen?"

"No one even beats up animals like this," he remarked.

Justice Nisar continued, "Why did you assault the citizen? You are a representative of the people and is this how you will behave?" "This is an unacceptable crime and we won't let it go," he asserted.

The chief justice then told the PTI MPA, "Beat me up and show me, I'll step outside the court."

As Shah apologised and said he was 'embarrassed', Justice Nisar said "what sorry?" and narrated that when he was a child he beat up a house help with a belt and his father beat him up for doing that to teach him a lesson.

"There is no compensation for insults," he observed.

The CJP asked citizen Dawood Chohan, who was thrashed by Shah, as to why he "forgave him". "The then nominated Sindh governor visited my house," Chohan responded. Dawood further told the court that the PTI MPA slapped him three to four times.

Justice Saqib Nisar then directed that the video clip of Shah thrashing Chohan be played. The chief justice then wrapped up the case and ordered Shah to donate Rs3 million to the dams fund.

Imran Shah was caught on video slapping a man, identified as Dawood Chauhan. The PTI’s Sindh chapter had also suspended Shah for a month.

PTI leader Ali Zaidi had said Shah had been suspended till the party’s disciplinary committee conducted an inquiry against him.

On August 25, PTI Karachi's Disciplinary Committee announced that Shah had been fined Rs500,000 and was directed to pay for the medical treatment of 20 elderly patients residing in Edhi center. The party had earlier also issued a show-cause notice to Shah saying his actions were 'unacceptable'. Following the backlash, the PTI MPA had also apologised to Dawood Chauhan in person.

Imran Shah was elected MPA from Karachi's PS-129 constituency during the July 25 polls.

The Chief Justice Justice Nisar had taken suo motu notice of the incident on August 18.

Earlier on Saturday, before the hearing of the cases at the Supreme Court's Karachi Registry, the CJP made surprise visits to three hospitals and examined the rooms of political prisoners.

"When Sharjeel Memon was asked [about the liquor], he said they were not his," The CJ said. "The attorney general should visit and see what is happening," he added.

Meanwhile, The CJP also paid a surprise visit to the room in National Institute of Cardiovascular Diseases (NICVD), where Omni Group Chairperson Anwar Majeed was admitted. He is under trial in a money laundering case.