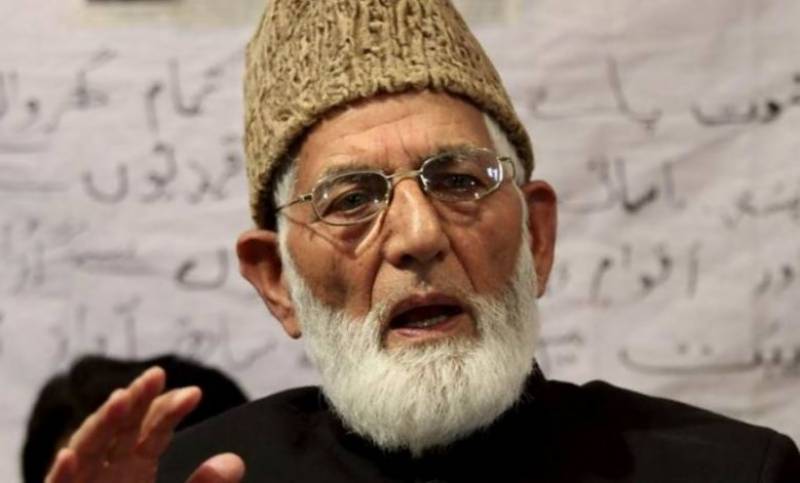 Rich tributes were paid to the to the freedom leader from across the Line of Control (LoC) and world over.

The veteran leader had breathed his last on September 1,2021. His body was forcibly taken away by the occupation forces and buried on September 2, even before the relatives living outside Srinagar could have arrived.

In a tweet, the premier said that Syed Ali Geelani personified the very essence of Kashmiris' struggle. He said Geelani powered the resistance movement with belief in the idea of freedom from Indian yoke.

He said Syed Ali Geelani remains as relevant to the freedom struggle today as he was in life.

Syed Ali Geelani personified the very essence of Kashmiris' struggle. Frail in body but firm in resolve, he powered the resistance movement with belief in the idea of freedom from Indian yoke. Geelani sahib remains as relevant to the freedom struggle today as he was in life.

In a tweet on Thursday, he said Pakistani nation pays tribute to the brave Kashmiri leader for his epic resistance and fight against worst Indian oppression and atrocities IIOJK.

Hurriyat leader Yasin Malik’s wife Mushaal Hussein Mullick said in her twitter message that the grave of the martyred leader was made sub-jail. “India is trembling, India is weakened. History will witness the sacrifices that Syed Ali Gilani gave for nation, for Islam and for humanity,” she said while saluting the martyr.

The Pakistan Strategic Forum in its message on the first death anniversary, paid rich tributes to Gilani for his epic struggle and resistance against the illegal Indian occupation.

In a tweet, the forum said Gilani throughout his life championed the right to self-determination of Kashmiris and advocated the settlement of the Kashmir dispute in line with the United Nations resolutions and the Kashmiris’ aspirations.

Meanwhile, the APHC AJK chapter took out a rally from National Press Club to Blue Area in Islamabad to pay homage to the iconic freedom leader. It was participated by political, religious and social figures.The participants carried banners with pictures of their beloved martyred leader and raised slogans in favor of Kashmiri martyrs and against illegal Indian occupation.

It is pertinent to mention here that on the call of All Parties Hurriyat Conference (APHC), a complete shutdown was observed in IIOJK to pay homage to the iconic leader.