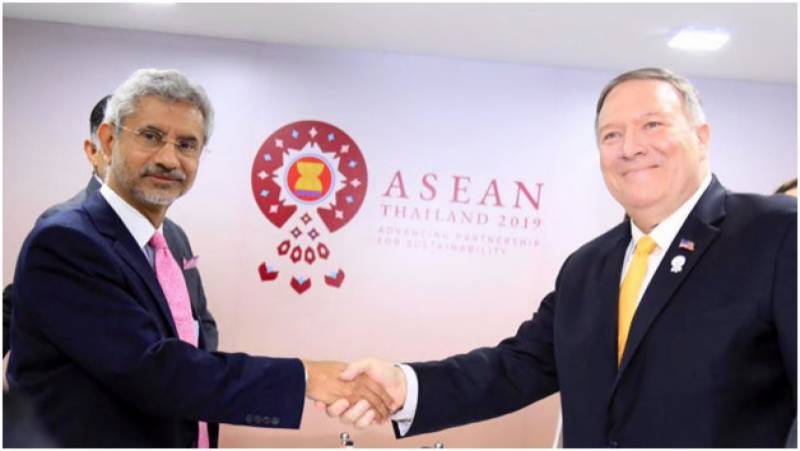 New Delhi (Web Desk): Indian Minister of External Affairs Subrahmanyam Jaishankar on Friday rejected US President Donald Trump’s offer to mediate between Islamabad and New Delhi on Kashmir dispute, saying any discussion on the disputed region will take place bilaterally and only with Pakistan.

“Have conveyed to American counterpart Mike Pompeo this morning in clear terms that any discussion on Kashmir, if at all warranted, will only be with Pakistan and only bilaterally, ” Jaishankar said in a tweet.

Earlier, Trump has reiterated his offer to mediate between Pakistan and India over Kashmir dispute.

“Ready to intervene or to help them if they [Pakistan and India] wanted,” Trump said in response to a question from a reporter at the White House about his earlier offer to mediate the Kashmir issue. “I spoke with Pakistan about that, and I spoke, frankly, to India about it. But that’s been going on, that battle, for a long time,” the US President said.

Last month, Trump, while talking to the media alongside Prime Minister Imran Khan at the White House, had said that Indian Prime Minister Narendra Modi had recently asked him whether he would like to be a mediator or arbitrator on Kashmir.

Trump, when questioned on Thursday by a reporter regarding India's rejection of third-party mediation, asked: "Have they accepted the offer or not?"

When told no, he said: "It is really up to Prime Minister [Narendra] Modi."

"I met Prime Minister [Imran] Khan, I got along great with [the premier]. I think they are fantastic people — Khan and Modi — I mean, I would imagine they could get along very well," he added.