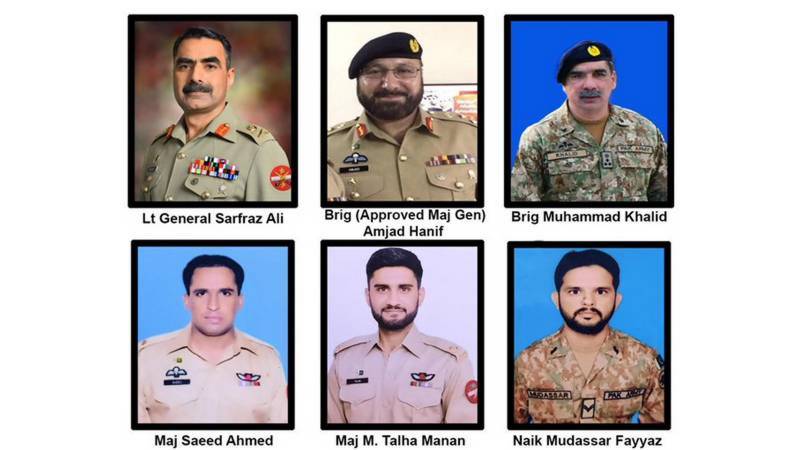 In a statement on Twitter, the military's media wing said that all 6 officers and soldiers including Lt Gen Sarfraz Ali embraced shahadat.

It added that the accident occurred due to bad weather, as per initial investigations.

Accident occurred due to bad weather as per initial investigations . DTF pic.twitter.com/dnyano2vqC

The chopper was on flood relief operations in Lasbela, Balochistan when it lost contact with ATC [air traffic control].

Pakistan Army aviation helicopter, which was on flood relief operations in Balochistan’s Lasbela, went missing on Monday after it lost contact with air traffic control (ATC), the ISPR said.

According to details, the COAS informed the premier about the ongoing search operations since last night.

The prime minister expressed his concern over the safety of Commander of 12 Corps Lieutenant General Sarfaraz Ali and other six officials and jawans onboard the helicopter.

He expressed concern for the safety of everyone on board.

The prime minister also asked the nation to keep the brave Pakistani soldiers in their thoughts and prayers, and stated that the unfortunate incident has deeply saddened the entire country.

The army chief has been informing the prime minister about the ongoing search for the missing helicopter since last night.