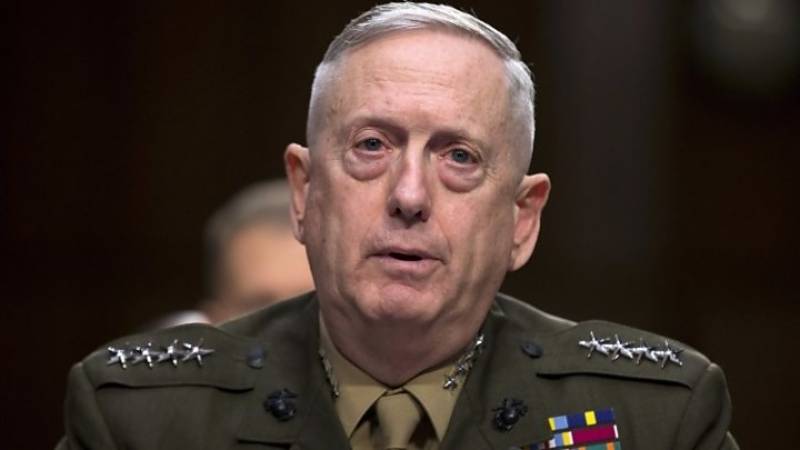 Washington (Web Desk): United States Defence Secretary James Mattis will reach Pakistan on Monday, for a one-day visit for talks on the new US strategy for South Asia, which seeks Pakistan’s support for defeating the Taliban, Pentagon reported.

A press release issued by the US Department of Defence said, the visit will be part of Mattis's trip to three other countries this week, which he is undertaking to "re-affirm the enduring US commitment to partnerships in the Middle East, West Africa and South Asia".

Earlier this month, the Pentagon’s Joint Staff Director Lt Gen Kenneth McKenzie told media that the US has completed additional deployments in Afghanistan by adding 3,000 troops to its existing strength and is ready to conduct joint combat missions with official Afghan forces.

The US now has a total of 14,000 troops in Afghanistan and expects 2,000 additional troops from its NATO allies.

The deployments are part of a US strategy to persuade Taliban to hold peace talks with the Afghan government by defeating them in the battlefield.

Further, Secretary Mattis is expected to seek Pakistan’s cooperation to accomplish this goal when he visits Islamabad.

Mattis is likely to ask Pakistan to eliminate the Haqqani Network which, the US claims, still has hideouts in the Federally Administered Tribal Areas (FATA) and uses them for launching attacks in Afghanistan.

The statement of press release issued by the US Department informs that Mattis will begin his multi-nation trip with a visit to Egypt on December 2, Saturday. There he will meet President Abdel Fattah al-Sisi and the defence minister.

On December 3, He will then proceed to Jordan to participate in the Aqaba Process, a meeting on countering violent extremism in West Africa, hosted by King Abdullah II.

After visiting Pakistan on Monday, the defence secretary will end his trip by visiting Kuwait on Dec 5, where he will meet Emir Sheikh Sabah Al Ahmad Al Sabah and other leaders.