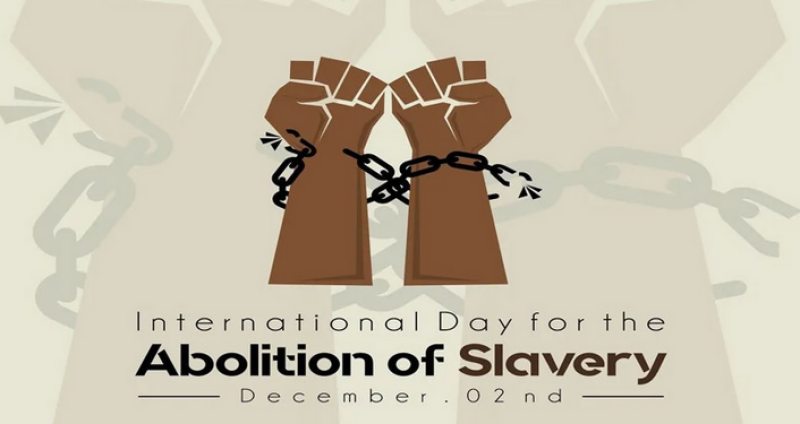 New York (Web Desk): International Day for the Abolition of Slavery is being observed across the globe today (Friday).

Theme for the day this year is "Stories of Courage: Resistance to Slavery and Unity against Racism."

The day is observed to raise awareness and calls for actions for eradicating slavery such as human trafficking, sexual exploitation, and child labour.

The day marks the date of the adoption, by the General Assembly, of the United Nations Convention for the Suppression of the Traffic in Persons and of the Exploitation of the Prostitution of Others (resolution 317(IV) of 2 December 1949).

According to the United Nations (UN), latest estimates by the International Labour Organisation (ILO) show that forced labour and forced marriage have increased significantly in the last five years. 10 million more people were in modern slavery in 2021 compared to 2016 global estimates, bringing the total to 50 million worldwide. Women and children remain disproportionately vulnerable.

Although modern slavery is not defined in law, it is used as an umbrella term covering practices such as forced labour, debt bondage, forced marriage, and human trafficking.

Essentially, it refers to situations of exploitation that a person cannot refuse or leave because of threats, violence, coercion, deception, and/or abuse of power.

Modern slavery occurs in almost every country in the world, and cuts across ethnic, cultural and religious lines. More than half (52%) of all forced labour and a quarter of all forced marriages can be found in upper-middle income or high-income countries.

ILO has adopted a legally binding Protocol designed to strengthen global efforts to eliminate forced labour, which entered into force in November 2016.