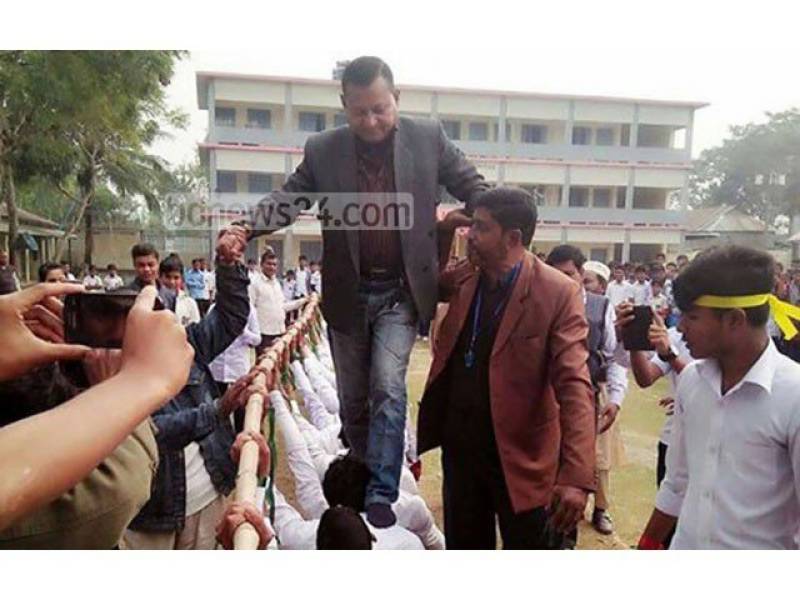 DHAKA: After Chandpur’s district’s mayor Nur Hossain images while walking on a human bridge went viral on social media and internet Bangladesh concerned authorities have started a thorough probe of the event.

Images of Mayor Nur Hossain, a then wealthy businessman clambering over groups of students who had been forced to form a human chain made parents to lodge complaints this week.

Dozens of students were made to stand and form a bridge out of their bodies for an elected mayor who then walked over them in the central district of Chandpur.

It was followed by a similar incident in which a businessman was seen walking on the shoulders of students in a celebration to mark his donation of a piece of land to a school in the district of Jamalpur.

“The students’ parents said they did not send their kids to school be part of this kind of thing which have a negative impact.”

Chandpur’s district administrator appeared to defend the mayor Nur Hossain, who is a ruling Awami League party official, saying it was a traditional celebration for an honoured guest.

“But we’ve an ordered investigation. We are trying to find out whether the elected official did it intentionally,” he told AFP, adding the mayor has since “apologised for his action”.

It was not immediately clear whether either man had actually broken the law but there were widespread calls on Facebook for their arrest on the grounds they had humiliated students.

“The people who organise and participate in such events should be punished. We don’t need any tradition which requires belittlement of human beings,” one Facebook user Ariul Islam wrote.

PM telephones his Bangladeshi counterpart ahead of her India visit