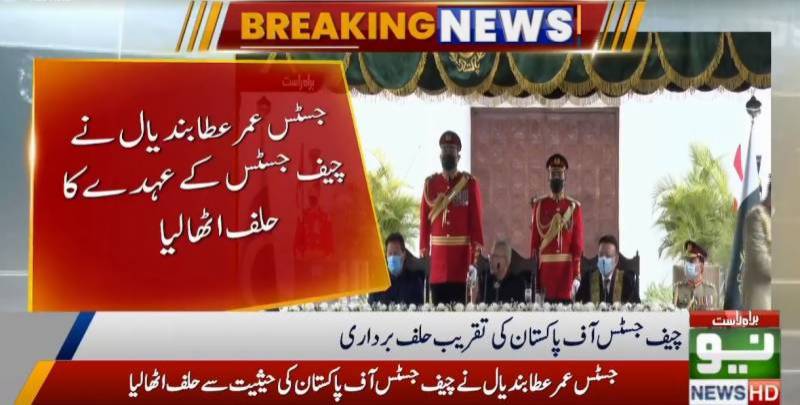 Islamabad (Web Desk): Justice Umar Ata Bandial was sworn in as the 28th Chief Justice of Pakistan (CJP) on Wednesday.

President Dr Arif Alvi administered the oath to the new chief justice of the Supreme Court (SC) in a ceremony at the President House in Islamabad.

Justice Umar Ata Bandial, who is the senior most judge of the Supreme Court, has assumed the office of the top judge of the country after retirement of Justice Gulzar Ahmed as CJP on February 1, 2022.

Justice Bandial will serve as the chief justice till his retirement on September 18, 2023, and will hold the position for some 19 months.

As per the judges seniority position, Justice Qazi Faez Isa will replace Justice Bandial as the next CJP in Sept 2023 and serve until Oct 25, 2024. He, then, will be replaced by Justice Ijaz-ul-Ahsan for 282 days.

Justice Syed Mansoor Ali Shah will become CJP on Aug 4, 2025 who is expected to remain in office till Nov 27, 2027, when he will be succeeded by Justice Munib Akhtar.

The SC judges, including the chief justice, retire once they are 65, while high court justices superannuate on reaching 62 years of age under the constitution.