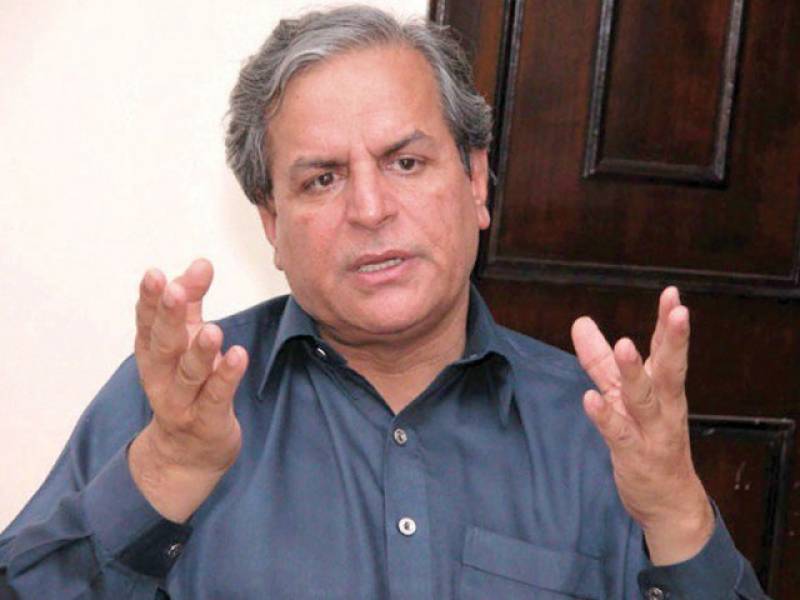 MULTAN: Javed Hashmi was an ace when he was welcomed by PTI before the 2014 Sit-In. He left his seat as PMLN MNA along with his daughter’s Punjab’s MPA just to join PTI considering it a way out of the stagnant and monarchic PMLN Government.

But now, Veteran politician Javed Hashmi has demanded the formation of a judicial commission to expose those who “scripted” the Pakistan Tehreek-i-Insaf (PTI)’s 2014 sit-in at Islamabad.

Responding to media talk of PTI chief Imran Khan made earlier in the day in Karachi wherein he rejected allegations Mr Hashmi had levelled in a TV talk show a few days ago and termed him “mentally unbalanced because of the age factor”, the latter said that Imran Khan had told him during the sit-in that after retirement of then chief justice Tassaduq Hussain Jilani, incoming CJ Nasirul Mulk would dissolve assemblies under a Supreme Court order.

“I resigned from the National Assembly when holidays of the apex court’s judges were cancelled... This seemed a big conspiracy to me,” Mr Hashmi said.

“This looked like the last item (on the script) because some ‘disgruntled generals’ had told Imran Khan that (the then prime minister) Nawaz Sharif would not sign his resignation,” he claimed.

“Some retired generals made all out efforts to derail the government. They were trying to disgrace the then army chief Raheel Sharif and parliament but they failed in their designs.”

Mr Hashmi said that the nation would be stunned if the conspiracy Imran Khan was involved in was exposed.

He challenged Mr Khan for an open debate and said that the media cell of the PTI had been abusing him for the last two years but now truth would be brought before the nation.

He said that Mr Khan was frustrated over his defeat in general elections (in 2013) though he (Mr Hashmi) had already made a prediction that the PTI would win only 40 to 45 seats (of the National Assembly).

After the elections, he said, Shah Mehmood Qureshi said in the presence of Mr Khan that elections were not rigged in Punjab.

Mr Hashmi said that when he asked Jahangir Tareen why “the umpire did not raise his finger” [during the sit-in], he replied ‘they are not coming as we could not fulfill the commitment of bringing in required number of people’.

“Our scriptwriters, whoever they were, had written that Tahirul Qadri will go to Parliament House and we [the PTI] would sit behind them. That was the main script... It was his [Imran’s] second step to get everything done by the Supreme Court,” as stated by Mr Hashmi.

The veteran politician said: “When General Mahmood asked Nawaz Sharif in 1999 to sign his resignation, the then premier chose not to sign the resignation and asked the general to kill him instead.

“This story about Nawaz Sharif was told to Imran by Gen Rashid Qureshi.”

In response to Mr Khan’s remarks that Mr Hashmi was mentally imbalanced, the latter urged the PTI chief to undergo a medical examination. “I will also undergo the same test to determine who is a saner person.”