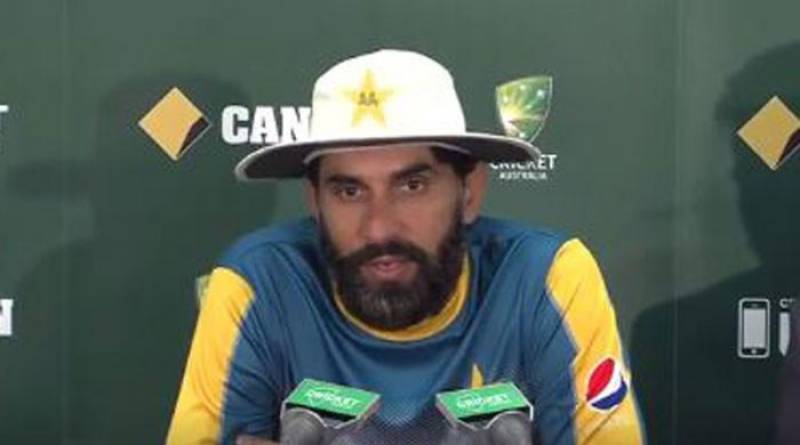 Sydney (Online): Pakistan captain Misbah-ul-Haq said Monday he will lead the side in the third Test against Australia in Sydney, dismissing suggestions he is about to retire, following the crushing defeat by an innings and 18 runs at the hands of Australia.

Misbah, 42, raised the possibility following his team´s abject innings defeat in the second Melbourne Test last week to lose the series, when he said he would contemplate his future and may even retire before Tuesday´s final Test.

But Pakistan´s most successful skipper on Monday appeared at the captain´s media conference before the Test to hose down speculation of his imminent retirement.

Misbah, who has scored a total of 20 runs in four innings in the series, said his comments after the innings and 18-run defeat in Melbourne were triggered by frustration.

"My team supported me. They´re up to fight, so I´m also up. I need to play at my best."

Misbah said he was not thinking about the end of his international career that started in 2001, although well-placed sources said he would make the final decision about his playing status once he returns home to Pakistan.

Misbah now concentrates only on Test cricket and retired from one-day internationals after Pakistan´s defeat to Australia in the World Cup quarter-final in 2015.

After the Australia Test series Pakistan do not have any Tests scheduled until April, when they will tour the West Indies for a four-match series.

Misbah´s most immediate assignment after the Australia series will be in the United Arab Emirates in the Pakistan Super League with Islamabad United, which starts on February 9.

Misbah opted against naming a final Test team on Monday, admitting there could be changes after his side´s woeful last day in the Melbourne Test.

He said, "Traditionally, Sydney is a bit different. It all depends on the final look of the pitch.”

Australia held an unassailable 2-0 lead in the Test series.

Heading into Sydney, Pakistan have not won a Test Down Under since their ´dead rubber´ victory at the Sydney Cricket Ground in 1995.

Misbah, Younis to get New job after retirement