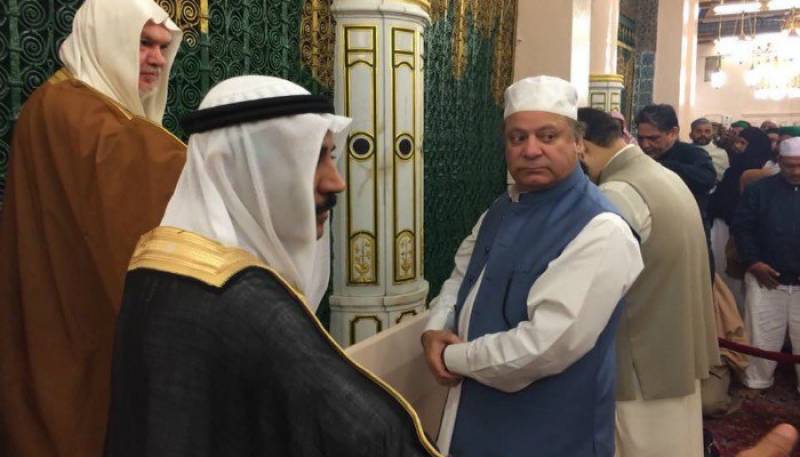 The spokesman said that Nawaz Sharif then left for Madinah and visited Roza-e-Rasool (PBUH) before leaving for Jeddah. Now he will proceed to Makkah for Umrah, after which the PML-N chief will fly back to Islamabad today.

The daughter of the former premier, Maryam Nawaz informed in a tweet that he would return to Pakistan tonight after performing Umrah.

Matters of mutual interests were discussed by both the leaders. Shehbaz appreciated the role Saudi Arabia played in the ongoing Palestine issue, sources added.

The Punjab chief minister is expected to leave for Lahore today.

Meanwhile, Punjab government spokesperson Mohammad Ahmed Khan condemned the allegations leveled against Shehbaz on his visit to Saudi Arabia, saying the statements being spread were baseless.

According to the spokesperson, Saudi Arabia is an ally of Pakistan and it was an honour for Shehbaz to be sent an aircraft from there. Mohammad Ahmed added that to criticise the Saudi government or the chief minister on the move was tantamount to being against national interests.

The Punjab government spokesperson said Pakistan and Saudi Arabia have brotherly ties which no “negative propaganda” can break.

Opposition parties have questioned the motive behind visits by the Sharif brothers to Saudi Arabia, and have asked if an agreement is being negotiated to save the Sharifs.

On Monday, Pakistan Peoples Party (PPP) co-chairperson Asif Ali Zardari commented on the Sharif brothers’ visit to Saudi Arabia, saying an agreement might be “cooking” in the country.

“No one knows what is cooking. There are a couple of rumours surrounding their visits to Saudi Arabia,” he said while talking to media