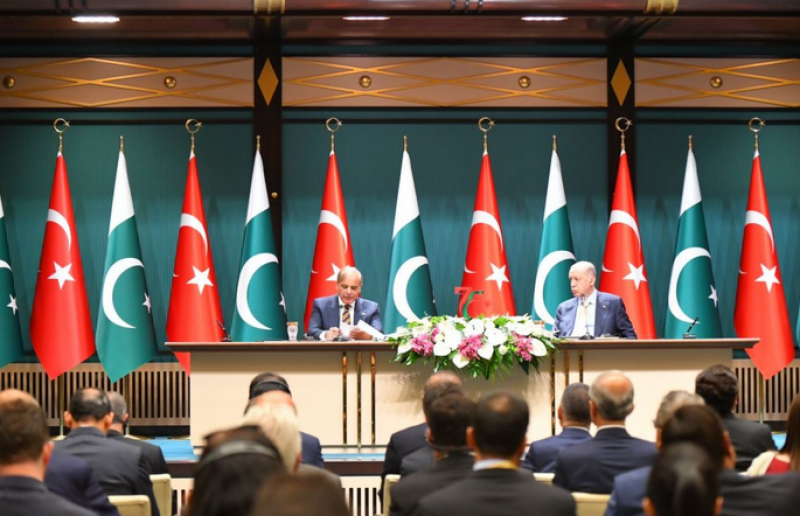 Addressing a joint press stakeout after holding a meeting, Prime minister Shehbaz Sharif said that the relationship between the two countries was embedded deep into history and shaped by shared goals.

These ties transcended times and continued from generations to generations, added.

He said this year, the two countries were celebrating 75th year anniversary of the establishment of their diplomatic ties.

PM Shehbaz, while terming his meeting with President Erdogan very productive, expressed the hope that under the dynamic leadership of president, the bilateral ties would scale to new heights.

He welcomed announcement from Turkish President to hold next session of high level meeting in Islamabad in the month of September.

PM Shehbaz said that a strong business delegation is also visiting Pakistan next June which will have productive results.

He expressed hope that people from Turkey will invest in sectors like e-commerce, tourism, education, infrastructure and hydro power generation.

PM Shehbaz said that launch of PNS BADR, MILGEM corvette is an example of our wonderful collaboration in defense industry.

Terming Pakistan and Turkey as partners of all times, he said many challenges faced by the two nations are same.

He said two nations have always stood by each other in testing time and on issues of core interests.

"Pakistan is convinced that durable peace in South Asia can only be achieved, if the long standing Jammu and Kashmir dispute is resolved in accordance with the UNSC’s resolution and wishes of the people of Kashmir," PM Shehbaz said.

Highlighting Pakistan's support to Turkey, Shehbaz Sharif stressed that enemies of Turkey are enemies of Pakistan.

He said Pakistan and Turkey's partnership is for perpetual good. He said we have worked together to promote shared objective of peaceful and stable Afghanistan.

PM Shehbaz said emotional bonds between the two countries go beyond conventional inter-state relations. It's a bond is deep-rooted in history, culture and in the fabric of our two societies.

In his remarks, President of Turkey Recep Tayyip Erdogan, said during their meeting, they had discussed the regional and international issues in detail.

They also reaffirmed to enhance the scope of bilateral ties, he said, adding the high level meeting would be held in Islamabad in September which would further provide opportunity to the both countries to further foster their brotherly ties.

President Erdogan resolved that the close friendship and cooperation between the two countries would be further strengthened.

He said that the two countries were also moving on with the defence cooperation projects and cited construction of ships.

President Erdogan said the mutual trade between the two countries had also soared to over $1 billion and they were resolved to take it to $5 billion annually.

He said tourism, education, logistic and civil aviation were the some other sectors in which they had been working to enhance cooperation.

The Turkish president underlined the need for the business companies of the both countries to increase the mutual investment as it was a driving engine for their economies.

He assured to encourage Turkish companies to increase their invest in Pakistan.

President Erdogan also reiterated support to the government of Pakistan in its efforts against terrorism.

He also reaffirmed Turkey’s support to Pakistan on the Kashmir issue, stressing for its legitimate resolution.

The Turkish president said that both countries are also making efforts to ensure a lasting peace and stability in Afghanistan and referred to the humanitarian assistance and support extended to the Afghan people".

Earlier, the two leaders also witnessed the signing of various agreements and MoUs for enhanced cooperation in diverse areas of mutual interests.