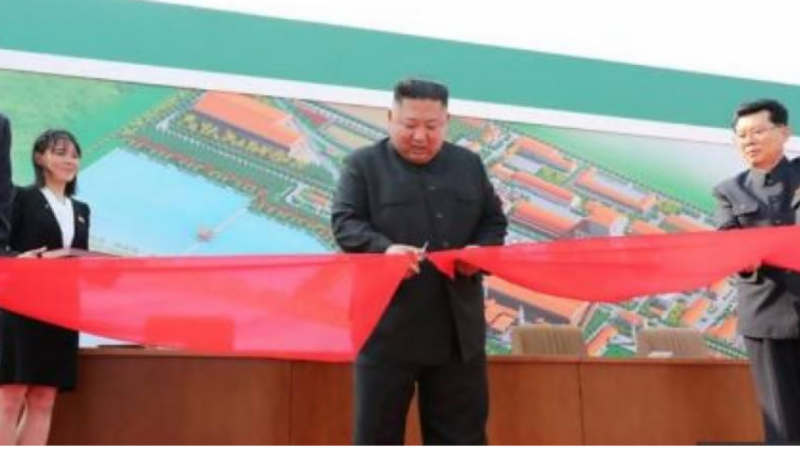 According to North Korea’s state media, Kim attended a ceremony of the completion of a fertiliser factory near Pyongyang.

He was last seen April 11 presiding over a political bureau meeting of the ruling Workers Party.

A foreign news agency reported that his apparent absence in events commemorating the 108th birthday of late founder and his grandfather, Kim Il-sung, on April 15 spawned speculation about his health, the for

Claims about Kim’s death came as unconfirmed reports mounted about his ill health stemming from his disappearance in public for nearly three weeks.

There were no clear signs that Kim was in discomfort. He was shown moving without a walking stick, like the one he used in 2014 when he was recovering from a presumed ankle surgery.

However, he was also seen riding a green electric cart, which appeared similar to a vehicle he used in 2014.

It wasn’t immediately clear what caused Kim’s absence in past weeks. In 2014, Kim vanished from the public eye for nearly six weeks and then reappeared with a cane. South Korea’s spy agency said he had a cyst removed from his ankle.

State media reported Kim was carrying out routine activities outside public view, such as sending greetings to the leaders of Syria, Cuba and South Africa and expressing gratitude to workers building tourist facilities in the coastal town of Wonsan, where some speculated he was staying.

According to analysts, Kim Jong Un’s health could become an increasing factor in years ahead: he’s overweight, smokes and drinks, and has a family history of heart issues.

Some experts say South Korea, as well as its regional neighbours and ally Washington, must begin preparing for the possible chaos that could come if Kim is sidelined by health problems or even dies. Worst-case scenarios include North Korean refugees flooding South Korea or China or military hard-liners letting loose nuclear weapons.