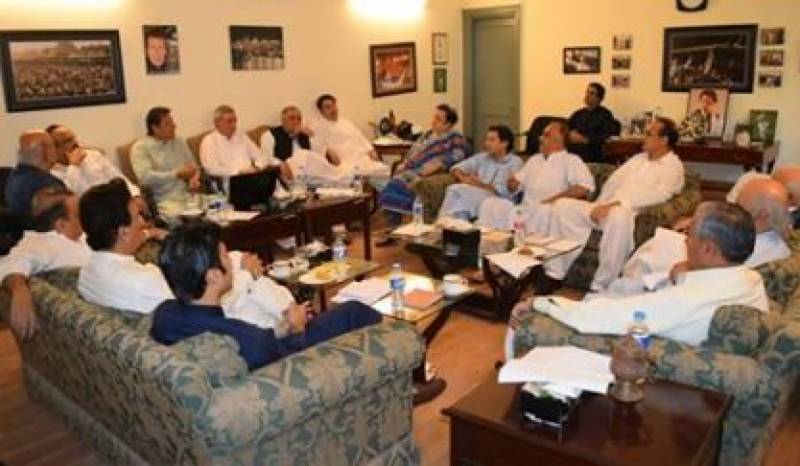 Khattak, the incharge of the government’s committee, was referring to Fazl's statement about the arrest of Prime Minister Imran Khan from the PM House.

He said that threatening words from the Azadi March leaders means that they are not going to stick to their word given during the meeting prior to the rally.

Khattak said that the government feared that the opposition leaders will not stick to their terms.

The senior PTI leader said that the door is still open to hold talks, reiterating that there will be no talk on the premier’s resignation.

As per sources, PM Imran informed the committee that he will not accept any unconstitutional and undemocratic demands of the Rahbar Committee Of the opposition.

Addressing the charged participants of ‘Azadi March’, the JUI-f leader said that all nation is on one page to send the incompetent government of PTI to home.

Maulana Fazlur Rehman termed the 2018 elections as rigged and said, "We don't accept the government formed on the basis of these elections".

Thousands of protesters led by the JUI-F arrived in the federal capital on Thursday seeking to send PTI Prime Minister Imran Khan-led govt for failing to run the country properly since winning the elections in 2018.

Lambasting the government for failing to uplift the economy of Pakistan, he said that inflation has risen to a level that common people are being forced to commit suicides.

Criticising government's repeated claims of fighting corruption, the JUI-F chief referring to a report prepared by the World Economic Forum said that corruption increased by two to three percent in the past year.

The JUI-F chief said that the opposition doesn't want to clash with the institutions and wants to see them strengthened.

"We want to see the institutions of Pakistan powerful but expect them to be impartial," he said, adding, "We do not want to collision with them".

He said that the incumbent government has left the people of occupied Kashmir alone.

The JUI-F chief, who had faced defeat during the general election in his stronghold constituency, has given the prime minister a deadline of two days to resign from the seat. "We cannot show patience more than this," he said.

The next move will be decided by the public if the "fraud" premier does not step down, he said. He warned, "The sea of people has the capacity to arrest the prime minister from inside the PM House."

Maulana Fazlur Rehman said that the PTI government cannot bar him from demanding the implementation of Islamic constitutional provisions.

"Pakistan and the religion of Islam cannot be separated," Rehman told the protesters. He also urged the participants not to leave Islamabad until the demands are met, turning the rally into a sit-in.

Pakistan Muslim League-Nawaz (PML-N) President Shehbaz Sharif while addressing the gathering claimed to strengthen the national economy within six months if the opposition parties were given an opportunity to serve the masses in future.

He criticized the government’s economic, health, education, and housing policies, underlining the need for immediate measures for benefit of the common man.

Pakistan People’s Party (PPP) Chairman Bilawal Bhutto also arrived at the rally’s venue, to address the crowd. He said that Pakistan’s people only believe in democracy but expressed concerns about the rigging in elections.

Calling the prime minister incompetent, the PPP chief said that it was the time to send the 'fake government' to home.