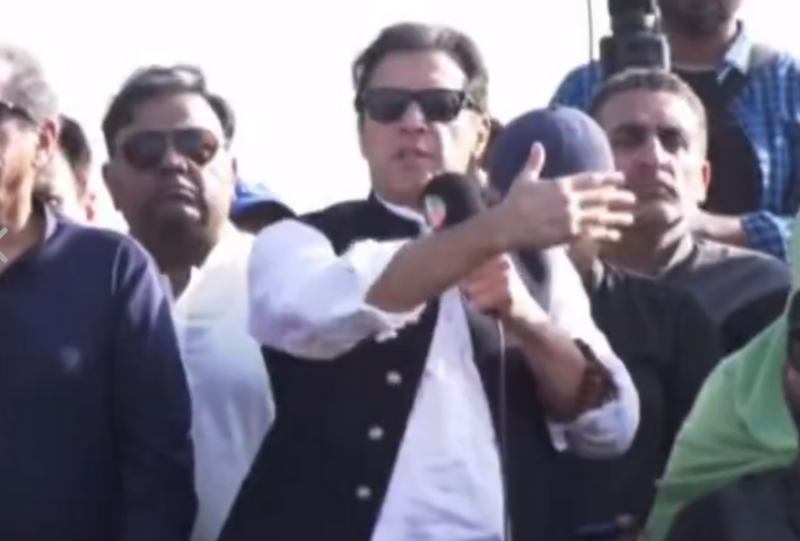 Addressing the participants of the march, the PTI chief said that his movement for haqeeqi azadi (real freedom) will continue for the next 10 months.

"Nobody should think our movement will end in Islamabad, it will continue for the next 10 months until we don't have elections," the former premier asserted.

Imran Khan said that he would not accept the incumbent government "at any cost" and would rather die than "bow down before these thieves".

The PTI chief urged people to "stand up for their rights".

The PTI chief said that the National Accountability Bureau (NAB) was not in his hands.

"Those who were controlling NAB saved these crooks," the former premier said.

Earlier, PTI leader Fawad Chaudhry said that the PTI will keep changing its plan to reach Islamabad to baffle the government.

Hitting back at the statements by Pakistan Muslim League-Nawaz (PML-N) Vice president Maryam Nawaz and Interior Minister Rana Sanaullah, Fawad said he wanted to tell them that

The former minister said that the PTI could give dates for reaching Rawalpindi and Islamabad one day and change them the next. "You will have to do the guesswork daily."

Earlier, former federal minister and PTI leader Asad Umar tweeted that the long march will converge on the federal capital on November 10 while other caravans will reach by November 11.

As per the initial plan, PTI's long march to Islamabad, now on the road for six days, was to reach Islamabad in seven.