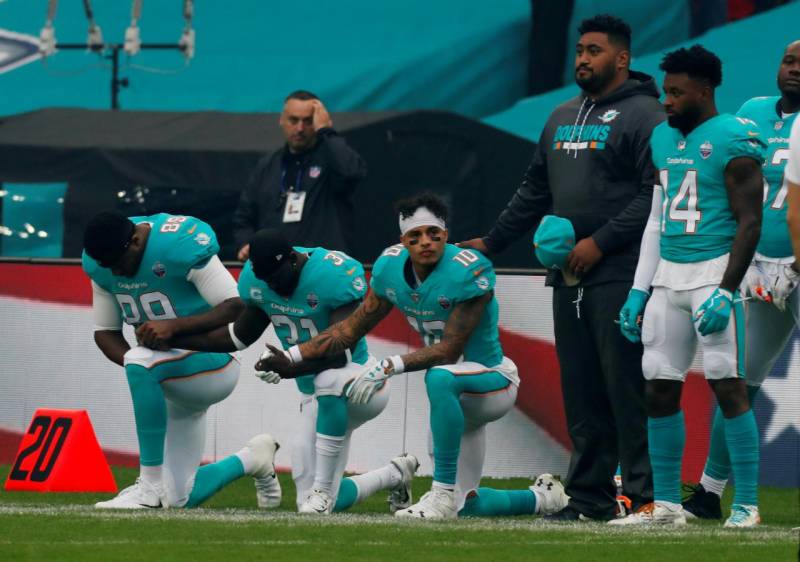 London (Reuters) - Three Miami Dolphins players knelt for the American national anthem before their NFL game in London on Sunday, after U.S. President Donald Trump had said the previous day that it was “very important” that players stood.

Julius Thomas, Michael Thomas and Kenny Stills all knelt during the anthem before kickoff at Wembley Stadium in the game between the New Orleans Saints and Miami. They then stood for the playing of the British national anthem.

All Saints players stood locking arms, having knelt as a team shortly before the anthem in a pre-planned moment.

On Saturday, Trump posted on Twitter: “Very important that NFL players STAND tomorrow, and always, for the playing of our National Anthem. Respect our Flag and our Country!”

Trump later tweeted video of fans and players standing at an NHL game and wrote: “19,000 RESPECTING our National Anthem!” Other Twitter users posted that the video Trump put up was nearly a year old.

Drew Brees, the New Orleans quarterback, had posted on Twitter earlier in the week that his team would kneel together before the anthem and then stand during it to show “respect for all”.

After the game, in which Saints shut out the Dolphins 20-0, New Orleans coach Sean Payton praised his team for their show of solidarity.

In a gesture initiated last season by then-San Francisco 49ers quarterback Colin Kaepernick, several NFL players have routinely knelt on one knee during the playing of the American anthem.

It is intended to call attention to what the protesting players see as a pattern of racism in the treatment of African-Americans by U.S. police.

The issue was exacerbated last week when Trump said that players who did not stand during the anthem should be fired.

Dolphins owner Stephen Ross supported his players who chose to kneel last year and said this week he will continue to do so this season.

Serena Williams withdraws from Indian Wells, Miami due to injury