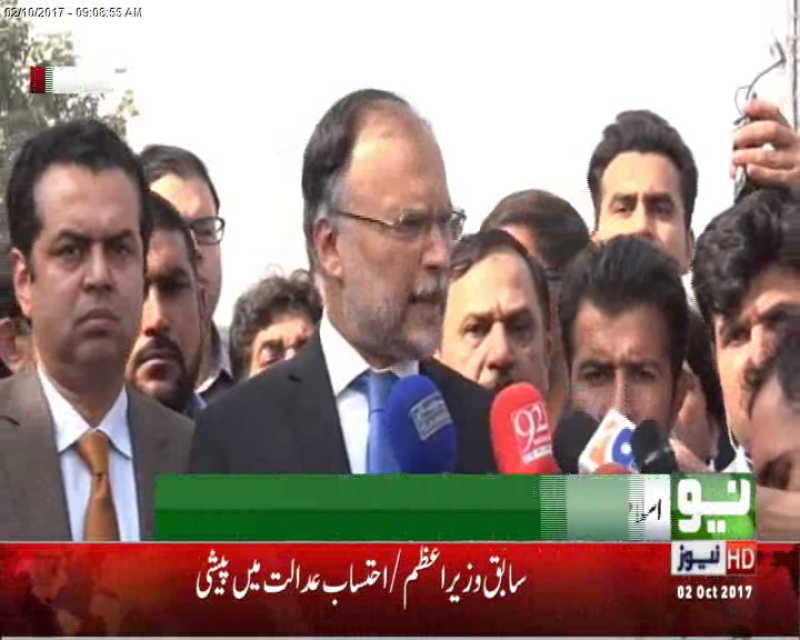 Islamabad (Staff Report): Interior Minister Ahsan Iqbal on Monday lashed out at the Rangers for barring PML-N leaders, lawyers and supporters from entering the accountability court in Islamabad where the former prime minister Nawaz Sharif has appeared for a hearing into graft cases against him and his family.

Rangers took control of the federal judicial complex on the hearing of former premier Nawaz Sharif and denied entry to ministers and media into the premises of the court.

When Interior Minister Ahsan Iqbal reached the complex, he too, was barred by the Rangers from entering. Upon this, he ordered for the Rangers' commanding officer, a Brigadier-ranked officer, to come out of the courtroom and discuss the matter with him.

Iqbal, who is the head of paramilitary forces, including Rangers, was accompanied by State Interior Minister Talal Chaudhry, Federal Railways Minister Saad Rafique and others.

Talking to media, Ahsan said courts are "open spaces" which supporters and lawyers of the defendant could enter.

The minister said it was only during martial law governments that closed trials were conducted, adding that trials held in democracies are "transparent". He said that civil administration has not given any directions regarding the deployment of Rangers, adding that the chief commissioner informed him that Rangers troops have taken control of the court suddenly.

He clarified that state within state will not be accepted, adding that Rangers are bound to follow the instruction of the civil administration.