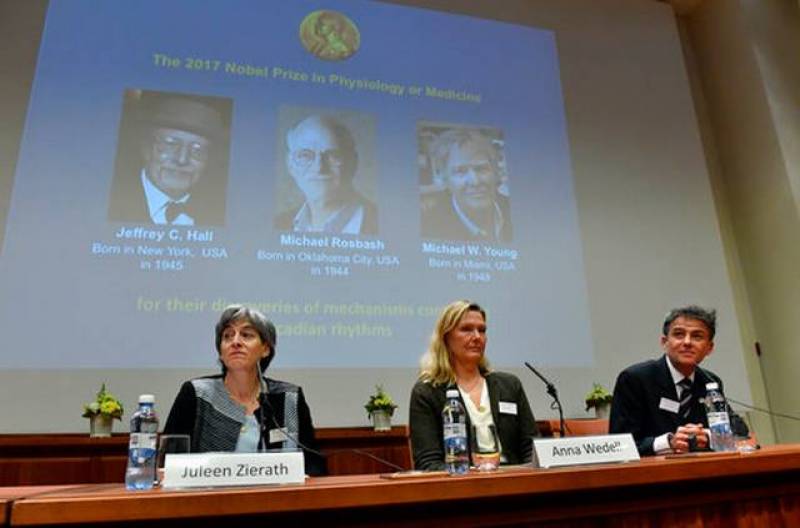 Stockholm (Web Desk): Three Americans won the Nobel Prize in Physiology or Medicine on Monday for their discoveries about the body’s daily rhythms, opening up whole new fields of research and raising awareness about the importance of getting proper sleep, The Washington Post reported.

They “were able to peek inside our biological clock and elucidate its inner workings,” the Nobel citation said.

Rosbash is on the faculty at Brandeis University, Young is at Rockefeller University and Hall has been associated with the University of Maine.

The winners have raised “awareness of the importance of a proper sleep hygiene” said Juleen Zierath of the Nobel academy.

Michael Hastings, a scientist at the UK Medical Research Council, said the discoveries had opened up a whole new field of study for biology and medicine.

“Until then, the body clock was viewed as a sort of black box,” Hastings told The Associated Press. “We knew nothing about its operation. But what they did was get the genes that made the body clock, and once you’ve got the genes, you can take the field wherever you want to.”

“It’s a field that has exploded massively, propelled by the discoveries by these guys,” he told a foreign news agency.

The awardees’ work stems back to 1984, when Rosbash and Hall, who was then also at Brandeis, along with Young isolated the “period gene” in fruit flies. Hall and Rosbash found that a protein encoded by the gene accumulated during the night and degraded during daytime. A decade later, Young discovered another “clock gene.”

“The paradigm-shifting discoveries by the laureates established key mechanisms for the biological clock,” the Nobel Assembly said in its prize statement.

“Our wellbeing is affected when there is a temporary mismatch between our external environment and this internal biological clock, for example when we travel across several time zones and experience ‘jet lag,’” the statement said. “There are also indications that chronic misalignment between our lifestyle and the rhythm dictated by our inner time keeper is associated with increased risk for various diseases.”

That misalignment may be associated with diseases including cancer and degenerative neurological conditions.

The Swedish news agency TT quoted Rosbash as saying he got the call about the award just after 5 a.m.

“I’m still shocked. I’m sitting here in my pajamas with my wife. I hadn’t even had a thought about this,” he said. “I haven’t spoken with my colleagues yet. I haven’t even had time to have a cup of coffee.”