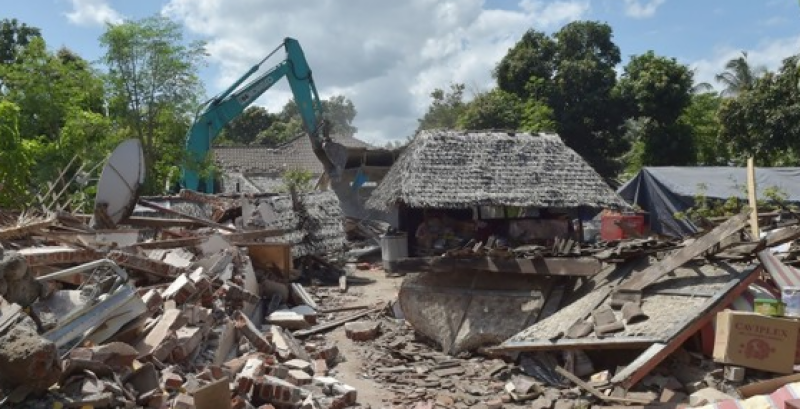 Palu (Agencies) Desperation exploded into anger Tuesday in the town closest to the epicenter of the massive earthquake and tsunami that hit parts of Sulawesi Island four days ago, with residents begging Indonesia's president to help them as hungry survivors crawled into stores and grabbed boxes of food.

Most of the attention so far has focused on the biggest affected city, Palu, home to 380,000 people with considerable damage. The confirmed death toll was raised to 1,234 on Tuesday afternoon, but national disaster agency spokesman Sutopo Purwo Nugroho said at a news conference in Jakarta that the communities of Sigi and Balaroa have not been counted yet, meaning the toll is likely to rise.

Donggala and other outlying areas have received little assistance largely due to impassable roads.

"Everyone is hungry and they want to eat after several days of not eating," Lassa said. "We have anticipated it by providing food, rice, but it was not enough. There are many people here. So, on this issue, we cannot pressure them to hold much longer."

Desperation was visible everywhere among victims receiving little aid. In Palu, signs propped along roads read "We Need Food" and "We Need Support," while children begged for cash in the streets and long lines of cars snarled traffic as people waited for fuel.

Teams were searching for trapped survivors under destroyed homes and buildings, including a collapsed eight-story hotel in the city, but they needed more heavy equipment to clear the rubble.

Many people were believed trapped under shattered houses in Balaroa, where the earthquake caused the ground to heave up and down violently, Nugroho said.

"I and about 50 other people in Balaroa were able to save ourselves by riding on a mound of soil which was getting higher and higher," resident Siti Hajat told MetroTV, adding her house was destroyed.

In the Petobo neighborhood, the quake caused loose, wet soil to liquefy, creating a thick, heavy mud that resulted in massive damage. "In Petobo, it is estimated that there are still hundreds of victims buried in mud," Nugroho said.

Residents who found loved ones - alive and dead - over the weekend expressed frustration that it took rescue teams until Monday to reach Petobo.

The magnitude 7.5 earthquake struck at dusk Friday and generated a tsunami said to have been as high as 6 meters (nearly 20 feet) in places.

About 3,000 residents flocked to Palu's airport Monday, trying to board military aircraft or one of the few commercial flights using the facility only partially operating due to damage. Video showed some of them screaming in anger because they were not able to get on a departing military plane.

"We have not eaten for three days!" one woman yelled. "We just want to be safe!"

Nearly 50,000 people have been displaced from their homes in Palu alone, Nugroho said, and hospitals were overwhelmed.

The Indonesian air force confirmed that a Hercules aircraft carrying an unspecified number of survivors was able to leave Palu for South Sulawesi's capital of Makassar. In addition, more than 100 police officers from the capital, Jakarta, were sent to Palu and additional Hercules aircraft carrying soldiers and supplies, including food and water, from east Java were en route, local television reported.

President Widodo authorized the acceptance of international help, Nugroho said Monday, adding that generators, heavy equipment and tents were among the most-needed items. The European Union and about 10 countries have offered assistance, including the United States and China, he said.

Australian Prime Minister Scott Morrison said Tuesday that his government had given $360,000 to help victims and was in talks with Indonesian authorities about a second round of aid. The initial funds would go to the Indonesian Red Cross for the most obvious emergency aid needs, such as tarpaulins.

The coastline at Palu was strewn with rubble and a few brightly colored cargo containers poking out of the water. Buildings near the water were ruined shells. The arches of a large yellow bridge rested in the water and eerie drone footage showed a Ferris wheel, untouched, on a beach scraped bare by the waves.

Rescuers searching a collapsed building Monday night were able to remove 38-year-old Sapri Nusin alive from the rubble. He was talking to his rescuers as they took him away but his condition was not known.

In the Petobo neighborhood, Edi Setiawan said he and his neighbors rescued children and adults, including a pregnant woman. His sister and father, however, did not survive.

"My sister was found embracing her father," he said. "My mother was able to survive after struggling against the mud and being rescued by villagers."

Indonesia is frequently struck by earthquakes, volcanic eruptions and tsunamis because of its location on the "Ring of Fire," an arc of volcanoes and fault lines in the Pacific Basin. A powerful quake on the island of Lombok killed 505 people in August, and two moderate quakes occurred near an eastern island on Tuesday.

The earthquakes 15 minutes apart reportedly damaged a bridge on the island of Sumba, but no tsunami warning was issued and no other damage was immediately reported. The temblors occurred nearly 1,600 kilometers (990 miles) south of Palu.

The vast archipelago is home to 260 million people on more than 17,000 islands that stretch a distance similar to that between New York and London. Roads and infrastructure are poor in many areas, making access difficult in the best of conditions.