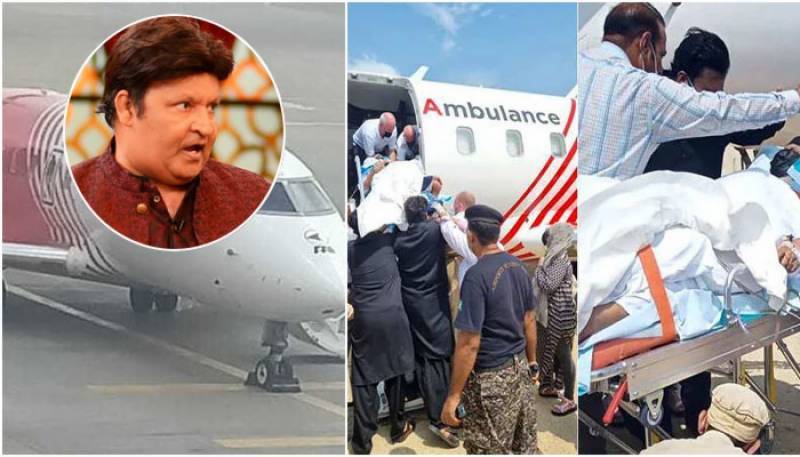 Islamabad (Web Desk): Nation mourned the death of comedy legend Umer Sharif with people from all walks of life expressing their deep grief and sorrow.

Sharif had been admitted to a hospital in Germany’s Nuremberg on Wednesday after his health condition deteriorated during his flight to the United States (US). He was diagnosed with multiple ailments including coronary conditions.

The renowned comedian was expected to resume his travel to the US for medical treatment but the stay was delayed after his health condition deteriorated.

Those who sent condolence messages over the demise of the veteran artist, included, major politicians show bizz celebrities, cricketers and social activists.

In his message, President Dr Arif Alvi said that late Umar Sharif had earned distinction in the field of comedy and carved out a place for himself.

— The President of Pakistan (@PresOfPakistan) October 2, 2021

Prime Minister Imran Khan, responding to the death of the legend, expressed deep sadness, noting that Sharif held a unique position in the field of comedic arts. "His services to art will long be remembered," he said.

Opposition Leader in the National Assembly and Pakistan Muslim League-Nawaz (PML-N) president Shehbaz Sharif also condoled over the demise and said that Umer Sharif was the identity of Pakistan globally and a legendary actor.

Pakistan Peoples Party (PPP) Chairman Bilawal Bhutto Zardari also expressed his grief at the demise of Sharif, recounting his contributions to the nation. He also went on to thank the deceased for re-defining comedy in Pakistan.

Federal Minister for Planning, Development, and Special Initiatives Asad Umar, who also heads the National Command and Operation Centre (NCOC), expressing grief at Sharif's death, said a person who had a god-gifted ability to put smiles on the faces of people had passed away.

Federal Minister for Information Fawad Chaudhry also said that the person who always put smiles on the faces of people of all ages has passed away.

Soon after the news of his death broke, fellow artists and celebs also took to social media and offered condolences to the family.

#UmerSharif sahib, you must be at peace now. You made us laugh so much and in end left all of us heartbroken. Go, regale the heaven with your jokes. pic.twitter.com/35kM7C4SIa

You shall always always be remembered.. thank you for laughter. Rest in peace.. Umar Shareef.

Deeply saddened to learn about Umer Sharif sb. He was without any doubt the ultimate comedy king. May Allah bless his soul. We will miss you Umer bhai! pic.twitter.com/2EUOv9FmNk

Heartbroken to receive the devastating news of our very own king of comedy #UmerSharif. He was a true gem in our industry and nothing short of a legend amongst us. May Allah grant him the highest place in Jannah. Praying for his family during this difficult time.

Complete loss of words on passing away of the legendary Umar Sharif sahab. May Allah grant him the highest place in Jannah and give his family peace. Ameen.

Saddened to learn about the passing of Umer Shareef Saab. Indeed we belong to Allah and to Him we return. My deepest condolences to His family and Fans.#UmerShareef

It’s heartbreaking ???? to hear about the death of sir #UmerSharif , the man who made people laugh all his life is no more with us , May Allah grant him the highest place in Jannah #UmerSharif #RestInPeace #Rip

We are all poorer today without his wit and wisdom to guide us. May his soul rest in peace. pic.twitter.com/7rHYCzKKsm

There will never be another Omar Shareef… a legend… an icon.. May he rise in jannat… pic.twitter.com/j8fr6rIZm9

I am not at loss of words. I know we are all dying. One day or the other. But what #umarsharif gave us, will be remembered till the end of times. A timeless legend succumbed to time. In the end, it’s all at the will of God.

If you were in his company he would never let you get sad or down. The way he used to see the world was very different from most of us and that could be witnessed in his performances. You will be missed Sir #umarsharif

so many laughters.. so so many smiling hearts.. we will always remember you sir.. #UmerShareef sahab May Allah grant you eternal peace.. ❤️❤️❤️

May Allah grant you the highest ranks in jannat.#umarsharif pic.twitter.com/MWmAZ9DecR

Rest in peace Umar Sharif sb???????? Thank you for your invaluable services for Pakistan and making us laugh with your eternal comedy over the years. You’ll be missed forever! pic.twitter.com/zvdoKIuCJ3

King of comedy Umer Sharif Saab is no more with us, we all miss you. May Allah rest his soul in peace ????????

The U.S. Mission to Pakistan extends our deepest condolences to the family of veteran comedian #UmerSharif. May his memory live on through his comedy and the continued admiration of his fans.

Taking to Twitter, Sindh Education Minister Saeed Ghani said that the provincial government was making arrangements for Sharif’s burial at Hazrat Abdullah Shah Ghazi cemetery as per his wishes.

The star was well-acclaimed as one of the biggest comedians in the sub-continent. He started his career in Karachi as a stage performer at the age of 14.