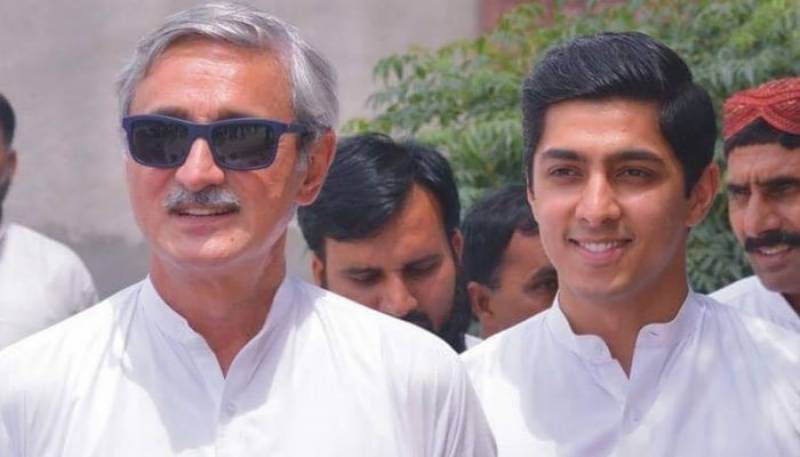 Lahore (Web Desk): Pakistan Tehreek-e-Insaf (PTI) leader Jahangir Tareen and his son Ali Tareen were granted bails by a session court and a banking court in Lahore on Saturday in the cases regarding alleged fraud and money laundering.

Tareen’s lawyer Barrister Salman Safdar in his arguments said that a political case was registered against his client. He requested to become part of the investigation.

The court directed the Federal Investigation Agency (FIA) to not arrest Jahangir Tareen and Ali Tareen till April 10 while granting them interim bail.

The court also served notice to the federal investigators and sought its reply in the case.

Meanwhile, a banking court also granted bail to Tareen and his son Tareens against surety bonds worth Rs 500,000 each and stopped the FIA from arresting the PTI leader and his son till April 7.

Talking to newsmen outside the court, Jahangir Tareen said that the cases against them have nothing to do with the increase in sugar prices in Pakistan.

The PTI leader said that he is being placed under a media trial to damage his reputation.

FIA had been handed this case "on purpose", Tareen said adding that the words money laundering had made this into a criminal case.

The FIA had filed First Information Report (FIR), against Jahangir Tareen and two other family members for alleged fraud and money laundering.

As per the FIR, Jahangir Tareen allegedly transferred illegal shares worth billions of rupees to Farooqi Pulp Mills Limited (FPML), which is owned by his son Ali Tareen and close relatives.

The FIR says that the transfer, especially after FY 2011-2012, were patently fraudulent investments which ultimately translated into personal gains for the family member of the JDW CEO.

It said that during this period, Tareen, his son and other family member purchased cash (US$) from the open market in Lahore in a "structured manner".

Reacting to the move, Jahangir Tareen had said that the allegations leveled against him were baseless as his personal and family assets are declared and all members are taxpayers. He said he did his business with honesty and suffered loss.

The PTI leader added that complete record of his business and transfer of cash is available, and has also been shown to the FIA.

Tareen claimed that all funds were transferred abroad through legal banking channel.

In 2020, PM Imran Khan had tasked the FIA to investigate the sugar crisis throughout the country and find out who benefited from it.

The report of the inquiry commission, headed by FIA chief Wajid Zia and comprising officials from other institutions was later made public by the government.