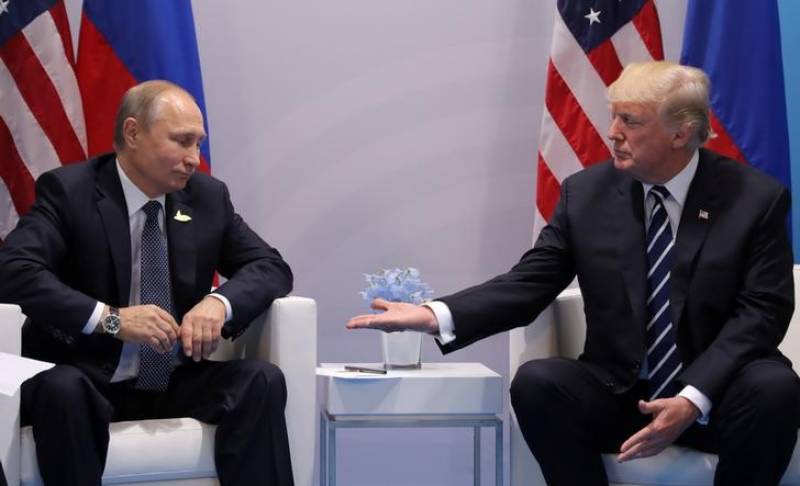 Washington (Reuters): US President Donald Trump grudgingly signed into law new sanctions against Russia on Wednesday, a move Moscow said amounted to a full-scale trade war and an end to hopes for better ties with the Trump administration.

Congress overwhelmingly approved the legislation last week, passing a measure that conflicts with the Republican president's desire to improve relations with Moscow.

Trump signed the bill behind closed doors, without the fanfare that has customarily accompanied his signing of executive orders. He criticized the measure as infringing on his powers to shape foreign policy, and said he could make "far better deals" with governments than Congress can.

Russian Prime Minister Dmitry Medvedev called the sanctions tantamount to a "full-scale trade war," adding in a Facebook post that they showed the Trump administration had demonstrated "utter powerlessness."

"The hope that our relations with the new American administration would improve is finished," he wrote.

Trump's litany of concerns about the sanctions, which also affect Iran and North Korea, raised the question of how vigorously Trump will implement them regarding Russia.

"While I favor tough measures to punish and deter aggressive and destabilizing behavior by Iran, North Korea, and Russia, this legislation is significantly flawed," Trump said in a message to lawmakers known as a signing statement. He also issued a statement for the press about the bill.

The new law allows Congress, which passed the measure to punish Russia over interference in the 2016 US presidential election and the annexation of Ukraine's Crimea, to halt any effort by Trump to ease sanctions on Russia.

His hands were tied after the Republican-controlled Congress approved the legislation by such a large margin last week that any presidential veto of the bill would have been overridden.

The legislation provoked countermeasures by Russian President Vladimir Putin, who said on Sunday that the US diplomatic mission in Russia must reduce its staff by 755 people. Russia is also seizing two properties near Moscow used by American diplomats.

Trump has repeatedly said he wants to improve relations with Russia. That desire has been stymied by US intelligence agencies' findings that Russia interfered to help the Republican against Democratic presidential candidate Hillary Clinton.

US congressional panels and a special counsel are investigating. Moscow denies any meddling and Trump denies any collusion by his campaign.