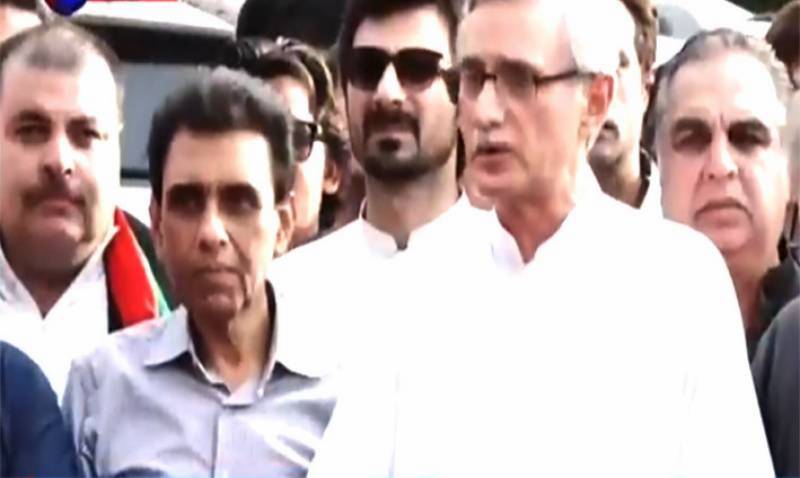 Islamabad (Staff Report): Muttahida Qaumi Movement-Pakistan (MQM-P) on Friday announced to support Pakistan Tehreek-e-Insaf (PTI) for the formation of government in the Centre.

Addressing a joint press conference after the meeting of MQM-P’s delegation to PTI chief Imran Khan at Bani Gala, PTI leader Jahangir Tareen said that both the parties have reached an agreement to become allies regarding formation of government in the Centre.

He said the manifesto of PTI gives deep importance to devolution of power and an effective local government system.

Tareen added PTI’s government will try to bring police reforms in Sindh in collaboration with MQM-P like it did in Khyber Pakhtunkhwa.

The PTI leader said the people of Karachi have expressed their confidence in PTI and MQM through their votes.

“Unfortunately, no serious effort was made in the past to resolve the problems of Karachi. However, PTI will take steps to give maximum relief and facilities to the urban areas by announcing a special package for the city”, he maintained.

He said that a university would also be set up in Hyderabad to grant the right of higher education to its residents.

Speaking on the occasion MQM-P convener Khalid Maqbool Siddiqui said his party’s delegation has visited Banigala at the invitation of PTI Chairman Imran Khan. He said today's meeting is a step forward to extend the journey of democracy.

Khalid Maqbool Siddiqui said both MQM and PTI have gained a huge mandate in urban areas of Sindh and they will cooperate with each other. He said devolution of power will bring more power to people.

The MQM-P convener said that the PTI has also assured to extend cooperation in the issues of census and delimitation. He said continued operation in Karachi will also be reviewed and taken to its logical conclusion.

The delegation presented its party's demands to Tareen in exchange for joining the treasury benches with PTI.

After successful conclusion of the first round of talks with PTI leaders Arif Alvi and Tareen, the delegation is now holding an important meeting with Imran at his residence in Bani Gala.

The MQM-P won 16 seats in the Sindh Assembly in the general election on July 25 and has six seats in the National Assembly.

Pakistan Tehreek-e-Insaf had invited MQM-P to join its coalition in the Centre.

Thirteen independent candidates won seats in the National Assembly during the general election and six of these have already joined the PTI.