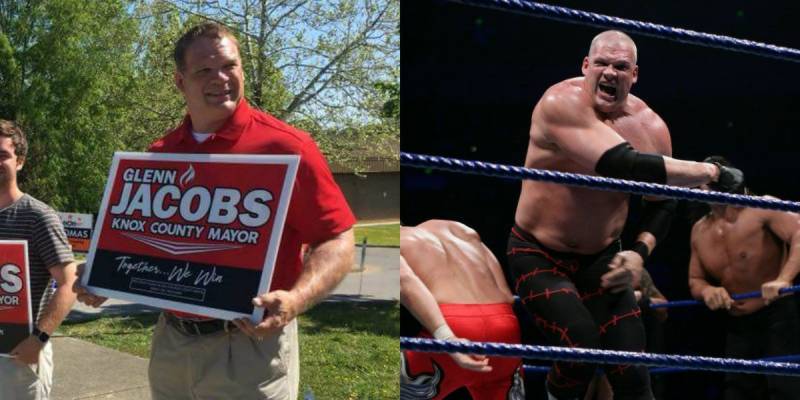 Jacobs, a Republican who also runs an insurance and real estate company, was leading Democrat Linda Haney by a large margin with most of the votes counted in Knox County on Friday.

The Knoxville News Sentinel reports Jacobs claimed victory at his watch party, saying his decision to seek the mayor’s job was met at first with “pretty resounding laughter” from some politicians.

Jacobs won a close primary in May. Results of the primary were delayed when the county’s election reporting website crashed after a concerted cyberattack that experts deemed “malicious.”

Haney ran small businesses with her husband before she retired. She was considered an underdog in the solidly-Republican county.

It was a reasonably significant change for the man whose WWE wrestling profile describes him as “a monstrous abomination that seems to have been extracted directly from your childhood nightmares”.

Jacobs is hardly the first WWE superstar to take a run in politics. Jesse Ventura served as the governor of Minnesota from 1999 to 2003. Former ECW competitor Terrance Gerin, known commonly as Rhyno, ran for the Michigan House of Representatives in 2016 as a Republican, but lost in the general election by more than 8,000 votes, according to WXYZ-TV.

Jacobs is still an active employee of the WWE and has not ruled out wrestling while serving his mayoral term.

“After I am elected mayor, I’ll be mayor. I may still do a few special things [with WWE],” Jacobs said, according to Yahoo Sports.

“I’ve done it for 23 years now and have quite a history, it’ll always be part of my life. I think the question is, if I am taking it seriously, and of course I am. I wouldn’t (be running) if not.

“I’m sure some people will say that (I’m not focused) and some others will say that’s the coolest thing ever,” he continued. “Again, you can’t make everyone happy. You just do what you can and that’s it … you’re always going to catch criticism no matter what you do.”