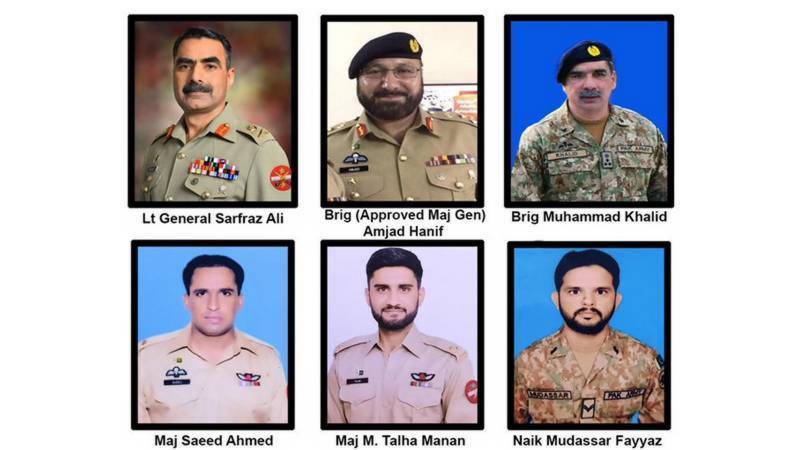 Rawalpindi (Web Desk): The funeral prayers of Pakistan Army officers and soldier martyred in a helicopter crash during the flood relief operations in Balochistan were offered in their native towns, the military's media wing said on Wednesday.

The military’s media wing said that the COAS visited the families of Lt Gen Sarfraz Ali and Brig Muhammad Khalid as well as the family of Lt Colonel Laiq Baig Mirza who embraced martyrdom at Ziarat.

The funeral prayers of Major Talha Shaheed was offered in Rawalpindi.

The funeral prayer of Naik Mudassar Fayyaz was offered in Shakargarh, Narowal.

An army contingent presented the guard of honour, the national flag was presented, and floral wreaths were laid.

The funeral prayer for Maj Saeed was offered at Larkana.

Pakistan’s flag was presented to the martyr’s father and he was buried with full military honour.

The military chopper had gone missing as it was en route from Quetta to Karachi at around 5:30pm on Monday. The personnel in the chopper were overseeing the flood relief efforts in the southwest of the country.