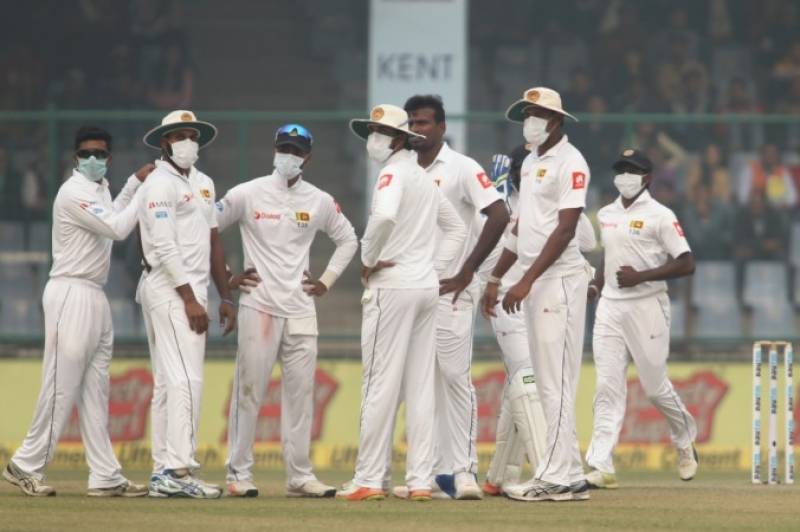 New Delhi (Web Desk): The third Test match between India and Sri Lanka was stopped on Sunday due to pollution in the capital city.

Many of Sri Lanka’s fielders returned from lunch on the second day wearing masks amid visible haze at the Feroz Shah Kotla stadium, the Crickbuzz reported.

The morning session of Day 2 began in typically hazy fashion and stayed that way, unlike Day 1, when the sun came out. In the post Lunch session, some of the Sri Lankan players walked out with pollution masks on and appeared to be struggling, leading to two unscheduled intermissions – of 17 minutes and 11 minutes. There was a lot of drama that followed as both coaches – Ravi Shastri and Nic Pothas – as well as the Sri Lankan team manager, Asanka Gurusinha, took turns to get onto the field and have long chats with the umpires.

The Sri Lanka players kept talking to the on-field umpires between overs and reported to them that they were out of players to put on the field after both fast bowlers – Suranga Lakmal and Lahiru Gamage – walked off. Manoj Abeywickrama, the fielding coach, and Nic Lee, the trainer of the side, were in full whites, ready to go on if it was required.

Indian skipper Virat Kohli declared first innings on 536-7 after play was interrupted several times due to complaints from Sri Lanka over air pollution that has been gripped by smog for over a month. Authorities declared a public health emergency last month as pollution soared to 40 times the safe World Health Organization levels.