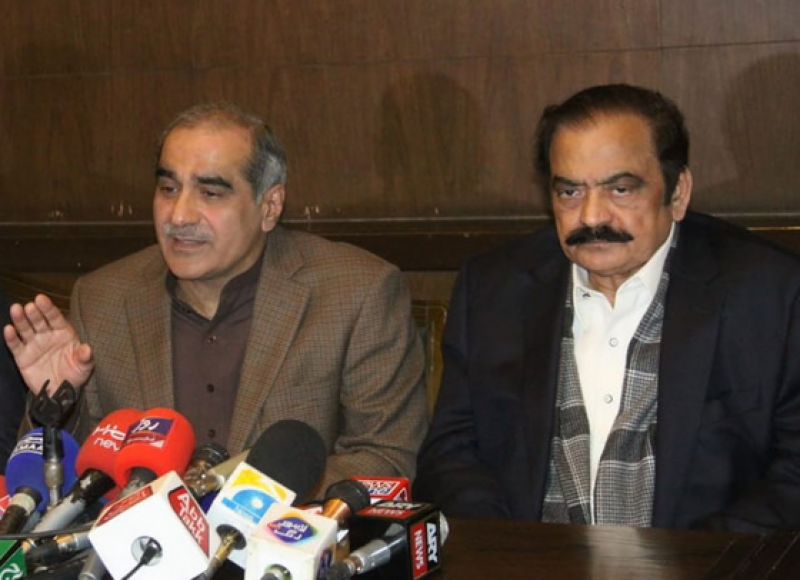 Addressing a press conference alongside Minister for Railways Khawja Saad Rafique in Lahore, Interior Minister Rana Sanaullah said that said that the coalition government will not accept conditional dialogue offer.

The minister said said dialogue and intimidating cannot move together.

“It’s them (PTI), who need talks not us. They start the talk of talks and then shy away from even talking about it,” he said, adding that negotiations are part of political process and complex problems are resolved when two sides hear each other out.

He said the dissolution of assemblies was not an act to be proud of for the Pakistan PML-N led government.

“We want the assemblies to complete their constitutional term, ” Khawaja Saad Rafique

He said if the PTI is serious then he should understand threats and negotiations are mutually exclusive.

Khawaja Saad Rafique said that general elections will be held on time.

The railways minister said that general elections will be held on time.

On Friday, PTI chief Imran Khan offered the government to hold talks over the date of next general elections.

In a video address to the PTI's Punjab parliamentary party from his Zaman Park residence in Lahore, the former premier gave the federal government an ultimatum to either “sit and talk and give a date for the general elections” or else provincial assemblies in Punjab and Khyber-Paktunkhwa (KP) will be dissolved.

Imran Khan said that Pakistan Muslim League-Quaid (PML-Q), a key ally of PTI in Punjab, was standing by his party.

The PTI chief added that Punjab Chief Minister Chaudhry Pervaiz Elahi assured him that the provincial legislature would be dissolved on his call.