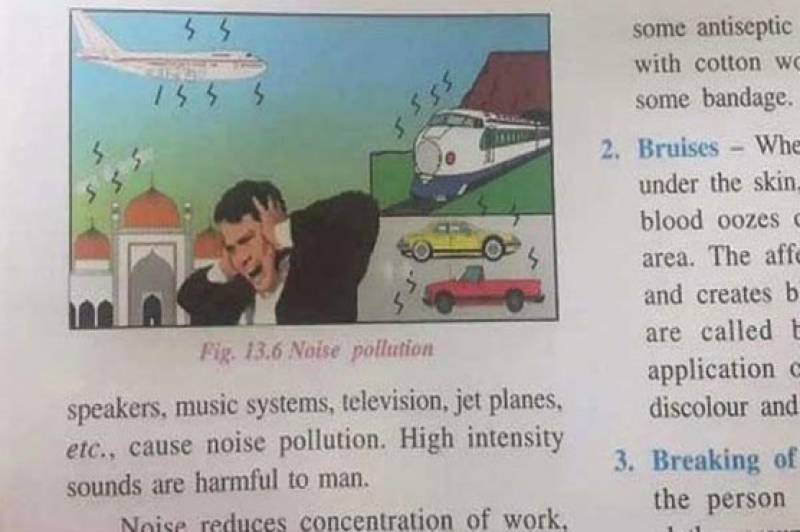 New Delhi (Staff Report): An image in a 6th grade science textbook taught in ICSE schools in India has depicted a ‘mosque’ as a source of noise pollution, reported Times of India.

According to details, the picture sparked outrage on social media, prompting an apology from the publisher and the promise that the picture would be removed in subsequent editions.

The picture depicts several symbols that showed noise pollution including a train, car, plane and a mosque instead of speakers. Next to them is a man shutting his ears due to noise.

Social media users strongly condemned the publisher’s mistake and have launched an online petition to withdraw the book.

Outrage after an image in class 6 textbook taught in #ICSE schools shows "mosque" as a source of noise pollution. pic.twitter.com/IMRp1S7w6s

Just mosques have loudspeakers ????, or it's just a subtle way to sow hatred in young minds? pic.twitter.com/OobFRSOvse

If mosque is a source of noise pollution then which kind of pollution will b the cow-urine nd big bangs in mundirs... Moodi jawab do

The publisher Hemant Gupta said that the diagram on page 202 of its publication, Integrated Science, consisted of "a structure resembling a portion of a fort and other noise producing objects in a noisy city".

He also made a public apology and said, "We do apologise if it has hurt the sentiments of anyone."

The publisher also said on social media sites, “This is to inform all concerned that we will be changing the picture in subsequent editions of the book.”