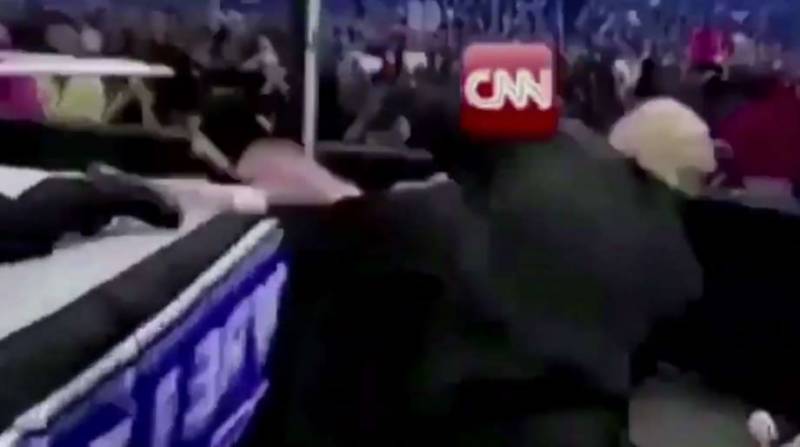 Washington (Web Desk): President Donald Trump, who has revealed in his confrontational style with the news media, sparked fierce debate Sunday over whether he is inciting violence against journalists by posting a doctored video clip showing him bashing the head of a figure representing ‘CNN’.

Trump's latest provocation in his war with the media brought denunciations from Democrats, and some Republicans, who warned that the president's conduct could endanger reporters as he seeks to undermine public trust in reporting about his administration.

"Violence & violent imagery to bully the press must be rejected," House Minority Leader Nancy Pelosi, D-Calif., wrote in one of the many comments from elected officials posted on Twitter.

Presidential historians suggested that Trump's social media attacks are lowering the bar on what constitutes appropriate presidential conduct in fighting perceived media enemies. H.W. Brands, a historian at the University of Texas, said Republican President Richard Nixon also felt mistreated, but "Nixon didn't air his grievances as publicly as Trump does. We've never seen anything quite like the ongoing performance of President Trump."

Meanwhile, White House aides and supporters defended the president's Twitter post as a pointed but harmless barb at what he sees as a hostile press corps. Some said the reaction demonstrated the inflated self-regard of reporters and their inability to take a joke.

Trump, from his Bedminster golf resort in northern New Jersey, defended his use of social media, saying it befitted a "modern day" president.

The latest salvo from Trump came as questions about the political climate for journalists, and their safety, have swirled amid incidents in which politicians have assaulted reporters or had them arrested. During the campaign, some reporters assigned to cover Trump, including ones from CNN, were cursed and threatened by his supporters, who echoed him with chants of "fake news."

In a statement, the Committee to Protect Journalists said that targeting media outlets "creates a chilling effect and fosters an environment where further harassment or even physical attack is deemed acceptable."

The organization, which tallies deaths of journalists across the globe, added that the White House's "charged rhetoric online" makes reporting "more dangerous" and "emboldens autocratic leaders around the world."

Trump had been combative with the news media throughout his campaign and in the first months of his presidency. But his anger and frustration have mounted in recent weeks amid intensive coverage of an FBI investigation into his campaign's alleged contact with Russian operatives, who U.S. intelligence agencies determined meddled in the presidential election in hopes of aiding Trump.

White House aides have fretted that the president's focus on the investigation has distracted him from building political support for his policy agenda, including a legislative rollback of the Affordable Care Act that is now pending in the Senate. And some of his public statements have embroiled him more deeply in legal questions over his conduct in the probe.

At the same time, the president and his aides believe that his feud with the media, which has included limiting the number of on-camera briefings, has played well with his conservative base. Late Saturday, Trump used a portion of a speech at "Celebrate Freedom" event at the Kennedy Center, in honor of military veterans and religious groups, to taunt the press.

"The fake media is trying to silence us, but we will not let them. The people know the truth," Trump said. "The fake media tried to stop us from going to the White House, but I'm president and they're not."

He drew a standing ovation from the crowd, which waved miniature American flags. On Sunday afternoon, Trump posted a video clip of the moment on Twitter.

Aides defended his tweet of the WWE video on Saturday, arguing that Trump has a right to fight what they say is unfair coverage. They suggested that reporters were overreacting to a video first posted several days ago on the popular social media message board Reddit.

"No one would perceive that as a threat; I hope they don't," homeland security adviser Tom Bossert said on ABC's "This Week."