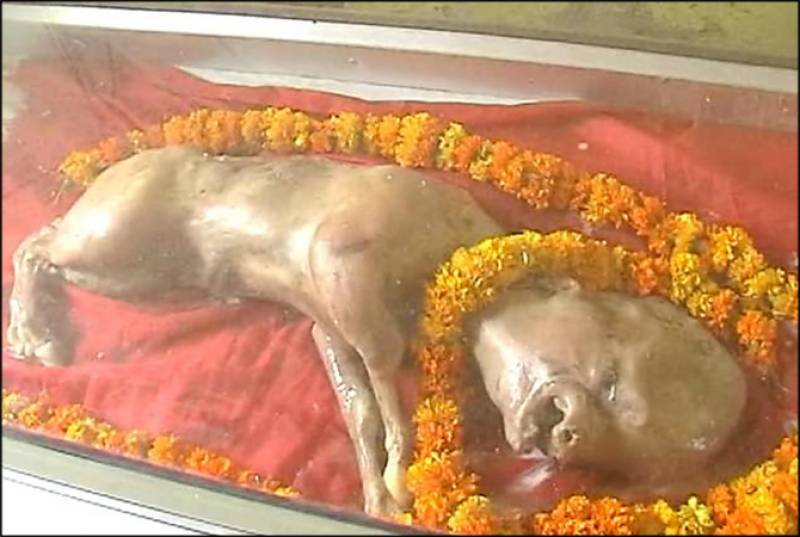 Muzaffarnagar (Web Desk): Indian villagers were shocked to discover birth of a cow with human-like head at an animal shelter, prompting media attention to an unusual birth.

According to details, the calf was born with the eyes, nose and ears that resemble that of a human, while the lower part of its body had features of a cow.

However, the cow died within an hour of its birth yesterday, in Muzaffarnagar, Uttar Pradesh, northern India. It was just a matter of news circulated for once among the villagers, and what ensued next was crowd of people thronging to catch a sight of a weird-looking animal, believing it to be an avatar of Lord Vishnu, a Hindu God.

The video shows people offering flower garlands and bowing before the dead calf, which has been kept inside a glass box since it died.

Locals believe the calf is the ‘Gokaran’ – 24 incarnations of Lord Vishnu and plans are now afoot to build a temple for him. Mahesh Kathuria, 50, a local businessman who came to see the calf, said: ‘God has taken birth from the body of a local cow. We came here to seek his blessings. Religiously, it is an avatar of Vishnu. We believe it’s a similar character mentioned in Bhagavata Puran, a Hindu religious text.’

However, animal health experts have a different view on its birth and rubbishes any superstitions surrounding it.

Dr Ajay Deshmukh, senior veterinary doctor, at Wildlife SOS, in India, said: ‘This is a case of an anatomical anomaly. If a gene didn’t develop properly or there was a fault, it causes multiple structural deformities, and such anomalies happen. It has got only scientific reasons and explanations, there’s no superstitions here.’

The story is originally published by ‘Mirror’.