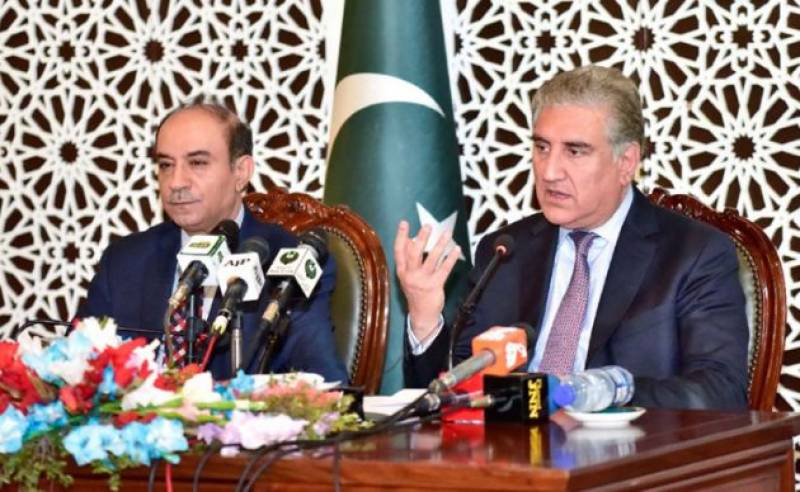 Islamabad (Web Desk): Foreign Minister Shah Mahmood Qureshi on Tuesday said that the people of Pakistan have certain expectations from the Organisation of Islamic Cooperation (OIC) and expressed the hope that it will not disappoint them.

Shah Mahmood Qureshi said that the OIC envoy was briefed in detail on the human rights situation in Occupied Kashmir, as well as discriminatory laws and communication blockade by Indian occupation authorities.

He was also informed the legal aspects of the Kashmir issue. The minister said the visiting dignitary was also briefed on situation along Line of Control (LoC) and the targeting of innocent civilians by Indian forces.

The foreign minister said that carnage of minorities, especially the Muslims, continues in India, the Radio Pakistan reported.

FM Qureshi said that the Indian steps pose a serious threat to peace and security in the region, an example of which was manifested in February last year when both India and Pakistan came to the brink of war.

The minister said Pakistan is a founding member of OIC and there are many resolutions of the body on Kashmir issue.

He said people of Pakistan have large expectations from OIC to play its role in the resolution of Kashmir issue.

Speaking on the occasion, Special Envoy for Jammu and Kashmir Yousef M. Al Dobeay said that OIC has always strongly supported the resolution of Kashmir issue.

He said the issue of Kashmir is very close to our heart and all members are on same page regarding its resolution.

Al Dobeay said the resolution of both Kashmir and Palestine issues stand at the top of the agenda of OIC.

“OIC Contact Group on Kashmir was established in 1994 and since then it has actively raised the issue time and again”, the envoy said.

Al Dobeay said that a formal session of OIC was convened on Pakistan's request after removal of special status of Occupied Kashmir by India on August 5 last year. He said a detailed report on situation in Occupied Kashmir will be presented to the office of secretary general upon his return.

Earlier, OIC Secretary General's Special Envoy held a meeting with Foreign Minister Shah Mahmood Qureshi at the Foreign Office in Islamabad in which the Indian steps of August 5, 2019 were discussed in contravention of the resolutions of the United Nations (UN) and OIC.

Shah Mahmood Qureshi said gross human rights violations continue in Occupied Kashmir by India. He said the statements of UN chief during his visit to Pakistan are a clear proof that Kashmir is not an internal issue of India.

The foreign minister urged all relevant institutions of the world to play an active role in view of the situation in Occupied Kashmir. He emphasised to resolve the Kashmir issue in the light of UN resolutions for peace and security in the region.

The OIC special envoy while expressing concern on the situation in Occupied Kashmir assured that OIC will play its due role for the rights of people of Occupied Kashmir.