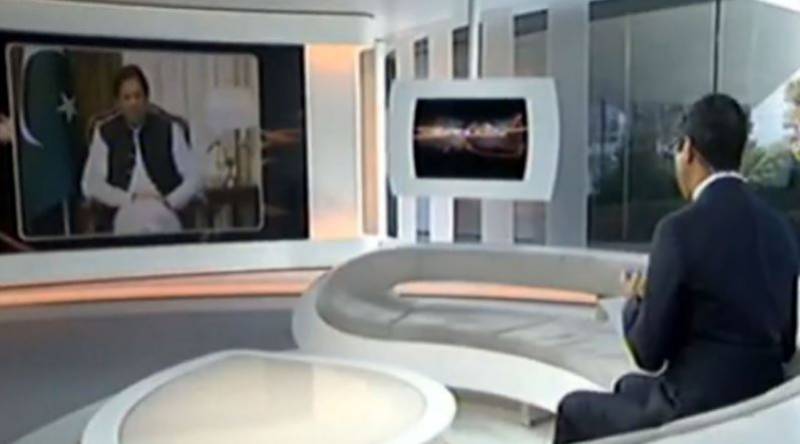 Islamabad (Web Desk): Prime Minister Imran Khan has said that Saudi Arabia will "always be a friend of Pakistan.

In an interview with Qatar-based Al-Jazeera, the premier said that the kingdom will "always be a friend of Pakistan" however, admitting that Islamabad wanted the OIC to take a front-role when it came to the issue of occupied Kashmir.

He said Pakistan has raised the lingering dispute at all the forums and it will continue doing so.

The PM maintained the world is not responding on the issue as unfortunately they are willing to ignore the huge travesty of justice for their commercial interests with India. He said it does not mean we sit down quietly and accept the injustice. He expressed the strong commitment to continue to draw the world attention towards the dispute.

Imran Khan said eight million people in Indian Illegally Occupied Jammu and Kashmir are in an open prison and eight hundred thousand troops are oppressing them.

Imran Khan said he never believes in any military solutions. He said this is the reason he extended a hand of friendship to India after assuming the power. He said the tragedy of India is that it is being ruled by an extremist government inspired by the ideology of Nazis.

When asked about the Afghan peace process, the Prime Minister warned against the spoilers. He said there is one country India which does not want to see peace in Afghanistan.

"Saudi Arabia will always remain a friend of Pakistan. However, we want OIC to take a bigger role on Kashmir." - Prime Minister Imran Khan#PMIKonAlJazeera pic.twitter.com/Qgl8JN0WJ7

Imran Khan said Pakistan has tried its best to get the Taliban and the Afghan government on the table of negotiations. He said we have reached close to peace and political reconciliation. This is a miracle that this is happening in Afghanistan and we pray this happens. He said Pakistan has a stake in a peaceful Afghanistan. Whatever the Afghans think good for them is good for us.

When asked about multi billion dollars China Pakistan Economic Corridor project, Imran Khan said we have excellent relations with China. He said our economic future is linked to China. He said Pakistan can really benefit from the way china has lifted people out of poverty.

He said Pakistan also has a very good relationship with the United States as both the countries are partner in the Afghan peace process.

When asked about normalization of relations between the UAE and Israel, the Prime Minister said if Palestinians are not allowed to have a just and viable state, the issue will not die down even some countries recognize Israel. He said the issue will keep festering.

Turning to the domestic situation, the Prime Minister said Pakistan has been put on the right direction over the last two years. He said we have introduced economic reforms and facilitated the businesses.

Imran Khan said Pakistan is a country with tremendous potential. He said new changes are taking place in Pakistan. Our whole policies are aimed at lifting the people out of poverty.

Regarding Covid-19 situation, the Prime Minister said Pakistan made probably the best but difficult decision of not imposing the complete lockdown. We went for a smart lockdown to control the pandemic and protect the vulnerable segments of the society from its impacts.

Reaffirming the government's stance against corruption, Imran Khan said this is the first time that the powerful are being held accountable.

The Prime Minister said both the civilian government and the military have the most harmonious relationship. He said we are working in complete coordination and cooperation. He said the military is standing together with the government's policies related to India or Afghanistan.