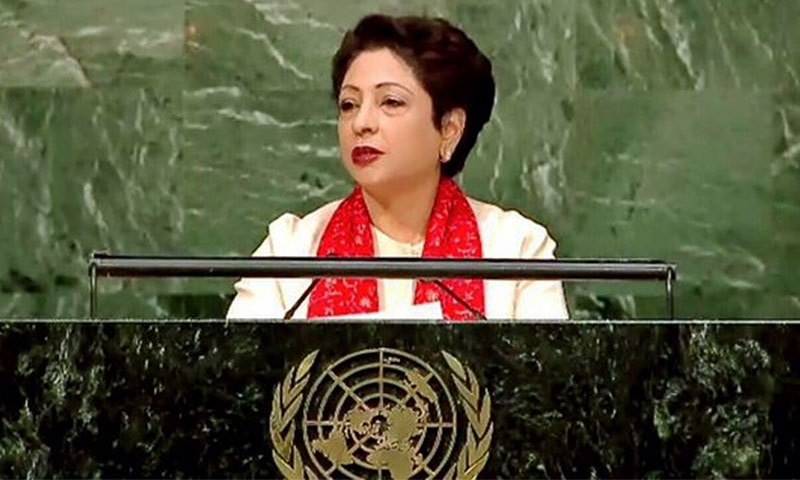 New York (Web Desk): Pakistan’s representative to the United Nations Maleeha Lodhi took stance at the United Nations that some nuclear weapons states are intent upon upgrading and modernising their inventories while preaching non-proliferation to others.

Speaking at the annual session of the United Nations Disarmament Commission, Ambassador Lodhi pointed to this “nuclear doublespeak” and said that peace and stability in South Asia cannot be achieved without resolving underlying disputes, agreeing on measures for nuclear and missile control and instituting conventional forces balance.

Lodhi said in her speech, “Our conduct continues to be defined by restraint and responsibility, and avoidance of an arms race in South Asia.”

A subsidiary organ of the General Assembly, was meeting against a turbulent global security backdrop the Pakistani envoy said the Commission.

The disarmament and non-proliferation landscape’ negative trends were due largely to the lack of progress on the part of nuclear-weapon states in fulfilling their legal nuclear disarmament obligations, and could be further impeded by recent vows by some such states to “greatly strengthen and expand nuclear capabilities”, the Ambassador noted.

Another key challenge was the granting of discriminatory waivers to some, and making exceptions for power or profit reasons, all of which constituted nuclear double standards and opened up the risk of diversion of materials intended for peaceful uses to military purposes, Ambassador Lodhi said.

She further noted that many states, “in particular in South Asia” continued to pursue those policies, with military expenditures rising and conventional weapons inventories expanding.

“Disruption of strategic stability in South Asia by induction of nuclear weapons in our neighbourhood fundamentally challenged [Pakistan’s] security,” she said in an obvious reference to the 1974 Indian nuclear test.

“We were left with no option but to follow suit in order to restore strategic stability in the region and deter all forms of aggression.

“Indeed, Pakistan had made a number of proposals to keep South Asia free of such weapons but none had elicited a positive response,” she noted.

Outlining a number of factors to guide states to consensus in the Commission, she said the agreement must proceed from the universally recognized premise that security was indivisible and based on the right of all states to equal security, both in the conventional and non-conventional fields.

“As envisaged at present, a cut-off only treaty would freeze the status quo to our permanent disadvantage and negatively affect strategic stability in South Asia,” Ambassador Lodhi said, informing the delegates that Pakistan had the requisite credentials and expertise to be part of international export control bodies and has, therefore, as a first step, sought membership of the Nuclear Suppliers Group (NSG).

“As the NSG deliberates on the legal, technical and political aspects of membership of non-NPT countries, it must establish and adhere to a transparent, objective and non-discriminatory criterion that ensure equal treatment of non-NPT applicants for the Group’s membership,” she said.