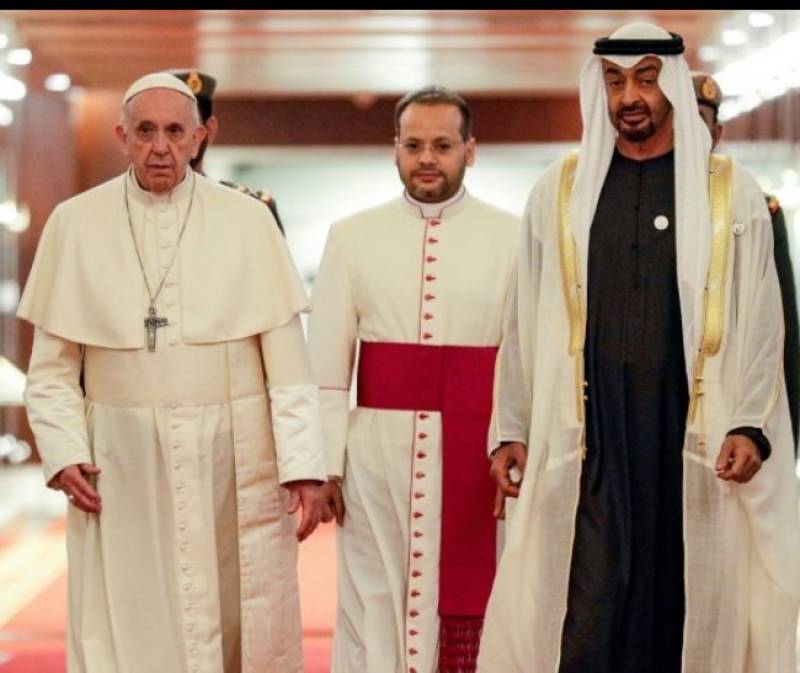 Abu Dhabi (Web Desk): Pope Francis on Sunday landed in the United Arab Emirates (UAE) for the first ever visit by a pontiff to the Arabian Peninsula — the birthplace of Islam.

The pope touched down in Abu Dhabi for the 48-hour trip during which he will meet leading Muslim clerics and hold an open-air mass for some 135,000 Catholics.

On Monday, Pope Francis will meet with the federation’s leader and a group of Muslim elders before addressing faith leaders in a show of religious tolerance in a Muslim region known for its restrictions on religious freedom.

Francis arrival followed his surprising appeal on Sunday at the Vatican for the urgent observation of a limited cease-fire in Yemen and for food and medicine to get to its people, who are suffering the world’s worst humanitarian crisis.

The Emirates has been Saudi Arabia’s main ally in its war in Yemen and Francis’ pre-trip appeal was a way for him to avoid embarrassing his hosts with a public denunciation of the humanitarian costs of the war while in the region.

“The cries of these children and their parents rise up” to God, he said from the Vatican before heading to Rome’s airport for his flight.

In a sign that regional politics was playing a not-insignificant role in Francis’ visit, the papal plane flew north of Qatar and around the peninsular, energy-rich nation on his flight Sunday.

Four Arab nations — Bahrain, Egypt, Saudi Arabia and the United Arab Emirates — have been boycotting Qatar since June 2017 as part of a regional political dispute. Tensions are still high between the nations, especially after Qatar’s win at the Emirates-hosted Asian Cup soccer tournament this past week.