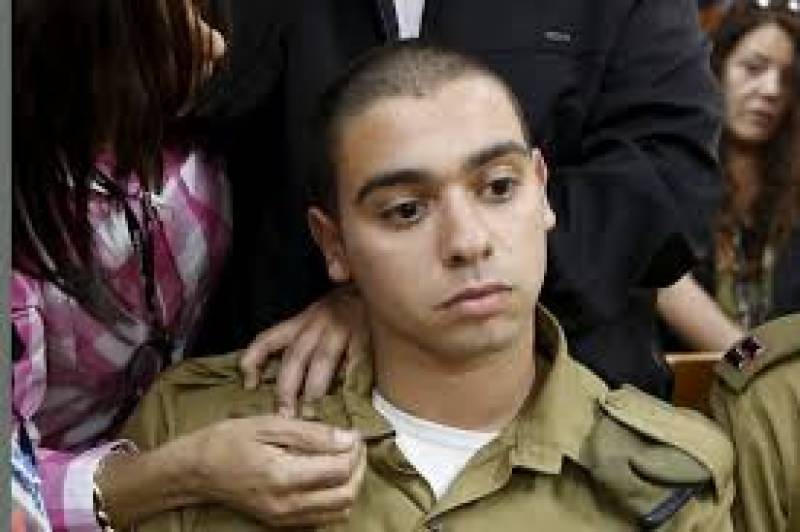 JERUSALEM: In a historic moot inside a heavily guarded military court in Tel Aviv, A young Israeli soldier, Elor Azaria, who shot the Palestinian after the assailant stabbed another Israeli soldier, is convicted as guilty.

The 20 year old Israeli soldier shot dead a Palestinian assailant lying wounded and motionless on the ground in the occupied West Bank was convicted of manslaughter on Wednesday in one of the most polarising cases in Israel's history.

The decision to court-martial Sergeant Elor Azaria, who shot the Palestinian after the assailant stabbed another Israeli soldier last March, stirred public controversy in Israel from the start, with right-wing politicians calling after the verdict on President Reuven Rivlin to pardon the 20-year-old defendant.

Ten months ago, Azaria was an army medic serving in the Israeli-occupied city of Hebron when two Palestinians carried out the stabbing. Hebron has been a longtime flashpoint of violence, and the incident occurred during a wave of Palestinian street attacks on Israelis.

One of the two assailants was shot dead by troops. The other was shot and wounded. Eleven minutes later, as the wounded man, Abd Elfatah Ashareef, 21, lay on the ground incapacitated, Azaria shot him in the head with an assault rifle.

At the trial, Azaria contended that he believed the Palestinian, though motionless, still posed a danger because his knife was nearby, and that he might have been carrying explosives. "He deserves to die," Azaria was quoted in the verdict as telling another soldier after pulling the trigger.

"One cannot use this type of force, even if we're talking about an enemy's life," the court said in its verdict. "We unanimously convict the accused of manslaughter and of conduct unbecoming (a soldier)."

Azaria, who was smiling as he awaited the verdict with his parents beside him, sat emotionless as the chief judge read out the conviction. But his mother screamed "you should be ashamed of yourselves" as the panel left the bench. "Our hero!" relatives of Azaria chanted after the verdict was delivered.

With the 50th anniversary of Israel's wartime capture of the West Bank approaching, the trial generated debate about whether the military, long seen as a melting pot for Israelis from a multitude of backgrounds, was out of touch with a public that has shifted to the right in its attitudes towards the Palestinians and ways of dealing with continuing violence.

Video footage of the shooting, taken by a Palestinian human rights activist, showed the knife was not within Ashareef's reach, and no bomb was found.

The video was distributed to news organisations, ensuring that the incident drew international attention amid allegations by Palestinians and rights groups that Israeli soldiers have been using excessive force against lightly armed assailants.

Surveys detected significant popular support for Azaria. In one poll, nearly half of Israeli Jews said any Palestinian who carries out an attack should be killed on the spot.

But despite a campaign by Azaria's family and rightist politicians that described the conscript, 19 at the time of the incident, as "everyone's child", members of Israel's military establishment argued that the shooting violated rules stating that soldiers can open fire only in life-threatening situations.

"They didn't give any weight to the evidence," Sharon Gal, the Azaria family's media adviser, said after the verdict. "It was like the court was detached from the fact that this was the area of an attack. I felt that the court picked up the knife from the ground and stabbed it in the back of all the soldiers."

Asa Kasher, co-author of the Israeli military's Code of Ethics, said the judges were meticulous.

"(They found) that it was a most unacceptable action on the part of the soldier. It is legally unacceptable, it is ethically, morally - it's simply impossible to accept it," said Kasher, a professor of philosophy at Tel Aviv University.

Prime Minister Benjamin Netanyahu at first backed up his then defence minister Moshe Yaalon in his criticism of Azaria's actions. But then Naftali Bennett, a far-right party leader in Netanyahu's coalition, who draws strong backing from Israeli settlers in the West Bank, came out in vocal support of Azaria.

Netanyahu then took the unusual step of calling Azaria's parents to express his sympathy after the soldier was arrested.

Rallies for Azaria, some backed by rightist politicians and pop singers, gathered momentum as the trial progressed.

But Tzipi Livni, a centre-left politician and former foreign minister, said after the conviction: "Brave and responsible leaders must stand behind the armed forces and its commanders today and say the verdict must be accepted.

"Only that way can we stop the bleeding within Israeli society since the event occurred and reunite around the military and Israel as a state of laws, whose army is outside political discourse."

In Hebron, Ashareef's family watched live television coverage of the 2-1/2-hour reading of the verdict.

"To say he is guilty is a good step, not bad, and we hope that the sentencing will be fair," Ashareef's father, Yousri, said. In a statement, the Palestinian Foreign Ministry said "the occupation's chain of command" must also be prosecuted, accusing it of inciting soldiers to kill.

Sentencing will be handed down at a later date. Azaria's lawyer said they would appeal to a higher military court. The manslaughter charge carries a maximum of 20 years' imprisonment, but legal experts expect the sentence to be shorter.