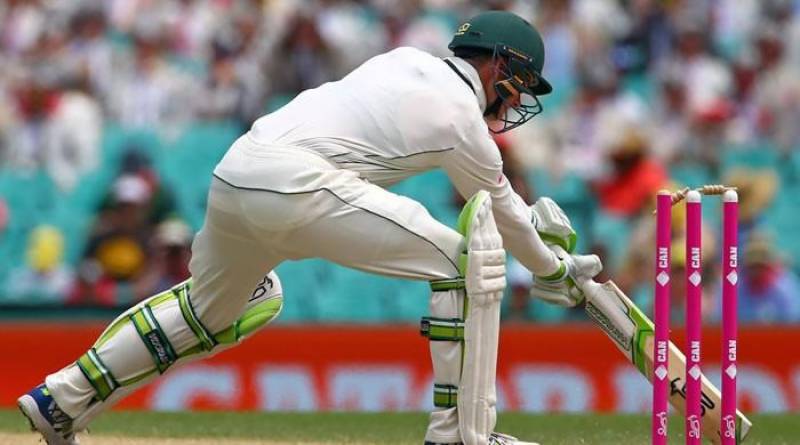 Pakistan were two down for six, as Sharjeel departed for four and Azam for duck on second day of the third Test against Australia at SCG on Wednesday.

Peter Handscomb posted his fourth half-century in four Tests as Australia pressed on after the loss of young opener Matthew Renshaw in the third Test against Pakistan on Wednesday.

Handscomb, brought into the Australian team with Renshaw in a shake-up after the Hobart Test debacle against South Africa in November, was working towards his second Test century on the second day.

At lunch, Australia had progressed from their overnight 365 for three to 454 for four with Handscomb on 83 and debutant Hilton Cartwright looking solid on 25.

The home side added 89 runs in the first session off 29 overs under sunny skies.

Renshaw´s epic knock ended inside the first half-hour when he played paceman Imran Khan on to his stumps for 184.

The 20-year-old rookie´s first century in his fourth Test came off 293 balls with 20 fours in 413 minutes. He shared in a 142-run stand with fellow newcomer Handscomb, who raised his fourth 50 off 109 balls.

Zimbabwe-born Cartwright, brought in for Nic Maddinson at number six for the Sydney Test, caressed a sweet cover drive for four from his first ball in Test cricket off Mohammad Amir.

But Cartwright had an escape on 25 just before the break when dropped by veteran Younis Khan at slip off Azhar Ali. The powerfully-built all-rounder shared in a 68-run stand with Handscomb for the fifth wicket.

Pakistan was showing the grueling effects of the back-to-back Boxing Day-New Year Tests with Amir and leg-spinner Yasir Shah nursing leg injuries and paceman Wahab Riaz leaving the field holding his right side.