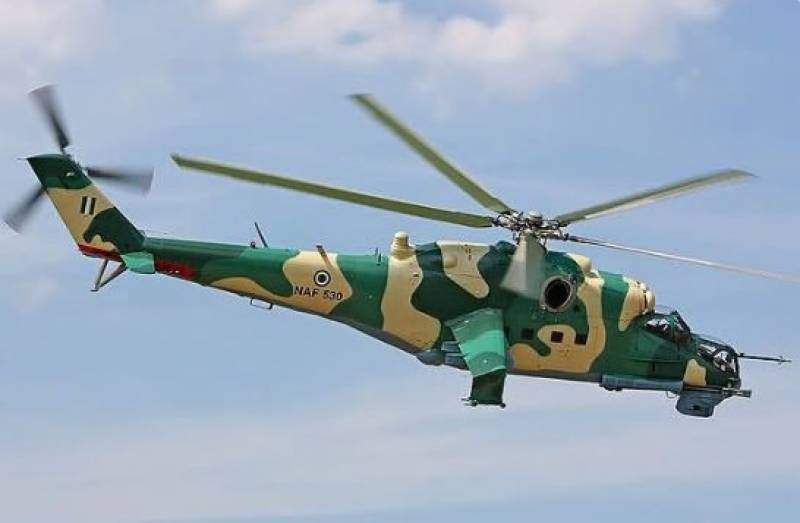 Maiduguri (Agencies) A Nigerian Air Force helicopter crashed in combat, killing five crew members, as fighting raged against militants for control of the strategic town of Baga in the northeast, the military said Thursday.

The crash occurred Wednesday at Damasak in northern Borno state, according to a tweet by air force spokesman Ibikunle Daramola. Officials did not say what caused the crash.

The military has been fighting to regain control of Baga, which the militants seized last week. The town is a key base for a multinational force fighting the militants. Many residents have fled to the Borno state capital, Maiduguri.

The fighting for Baga has been intense, the chief of army training and operations, Maj. Gen. Lamidi Adeosun, told reporters. "It's a ding-dong situation but we are engaging them," he said last week. "We are not in total control but Boko Haram have not taken control of Baga, either."

The base in Baga, close to the border with Chad, has weapons, ammunition and other equipment that are a key target for the militants, who also overran the base in 2015.

The Islamic State West Africa Province, an offshoot of the decade-old Boko Haram militant group and the largest IS-linked militant group in Africa, claimed to kill or wound "dozens" of soldiers in the latest attack, according to the SITE Intelligence Group that monitors militant communiques.

Fifty-three police are missing, according to a senior police officer in Maiduguri, who spoke on condition of anonymity because he was not authorized to speak to the press.

Nigeria's defense minister, Mannir Dan-Ali, on Wednesday reiterated the military's commitment to ending Boko Haram's insurgency. He spoke to the press while on his way to neighboring Chad to discuss militant activity in border areas.

Nigeria's government recently confirmed the militants had begun using drones, calling it a "critical factor" in a rise in attacks against military bases. The military rarely announces death tolls, but the government in November acknowledged dozens of soldier deaths.

President Muhammadu Buhari at the time held an urgent meeting with member countries to "enhance the capacity" of the multinational force.

The nearly decade-old Boko Haram insurgency has been blamed for some 20,000 deaths and thousands of abductions. The unrest and displacement of millions of hungry people have turned northeastern Nigeria into one of the world's worst humanitarian crises.