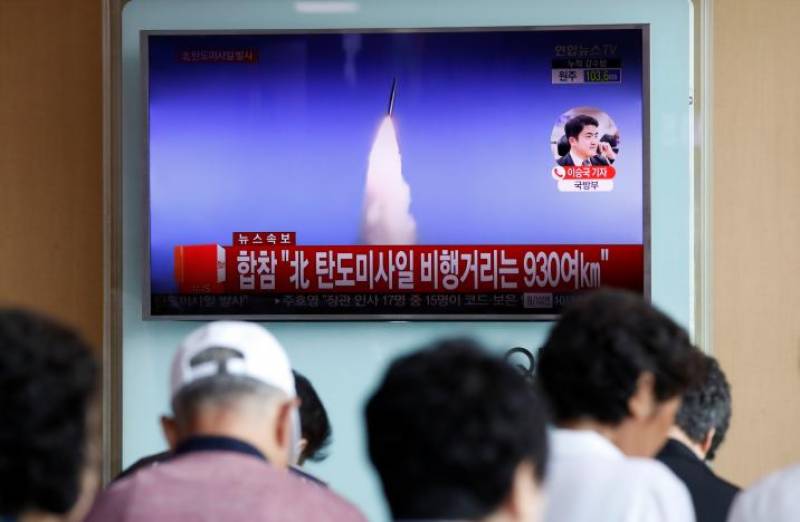 Seoul (Reuters): North Korea test-launched a ballistic missile from its western region into the sea off its east coast on Tuesday, South Korea's military said, ahead of a summit of leaders from the Group of 20 nations in Germany later this week.

The missile flew for about 40 minutes and landed in Japan's Exclusive Economic Zone (EEZ), the Japanese government said, adding it had strongly protested what it called a clear violation of UN resolutions.

The missile flew about 930 kilometers (580 miles), the South's Office of the Joint Chiefs of Staff said, adding the altitude reached by the projectile was still being analyzed.

North Korea is ignoring repeated warnings from the international community, Japan's Prime Minister Shinzo Abe said on Tuesday. Abe said he will ask the presidents of China and Russia to play more constructive roles in efforts to stop the North's arms program.

"Leaders of the world will gather at the G20 meeting. I would like to strongly call for solidarity of the international community on the North Korean issue," Abe told reporters.

It was the fourth ballistic missile launched by the North since South Korean President Moon Jae-in took office in May, vowing to use dialogue as well as pressure to bring Pyongyang's nuclear and missile programs under control.

Following the news of the latest launch, U.S. President Donald Trump wrote on Twitter: "North Korea has just launched another missile. Does this guy have anything better to do with his life?" in a reference to the North's leader Kim Jong Un.

"Hard to believe South Korea and Japan will put up with this much longer. Perhaps China will put a heavy move on North Korea and end this nonsense once and for all!"

The White House offered no immediate comment on the missile launch on Tuesday.

In his meeting with Moon last week in Washington, Trump called for a determined response to North Korea, stressing the importance of the alliance between the two countries.

The North has in the past launched ballistic missiles timed to key diplomatic events and meetings of leaders.

Tuesday's missile was launched around 0040 GMT (8.40 p.m. ET) from an airfield in Panghyon, about 100 km (60 miles) northwest of the North's capital, Pyongyang, the South Korean military said. It did not immediately release the range and class of the missile, citing ongoing analysis.

The last North Korean missile launches were in early June and the one on Tuesday came ahead of the G20 summit on July 7-8 in Hamburg, Germany, where the United States, China, Japan and South Korea are expected to discuss efforts to rein in the North's nuclear and missile tests.

Pyongyang has been working to develop a nuclear-tipped missile capable of hitting the United States and has conducted missile-related activities at an unprecedented pace since the start of last year.

Earlier this week, North Korea was a key topic in phone calls between U.S. President Donald Trump and the leaders of China and Japan. Leaders of both Asian countries reaffirmed their commitment to a denuclearised Korean Peninsula.

Moon said on Monday in a meeting with former U.S. president Barack Obama that North Korea now faces its "last opportunity" to engage in talks with the outside world

In his meeting in Washington on Friday with Moon, Trump called on regional powers to implement sanctions and demanded the North "choose a better path and do it quickly."

The U.N. Security Council adopted its latest sanctions resolution in early June after North Korea conducted three ballistic missile test launches in May. Pyongyang routinely rejects such moves, saying they infringe on its sovereign right to self defense and space exploration.