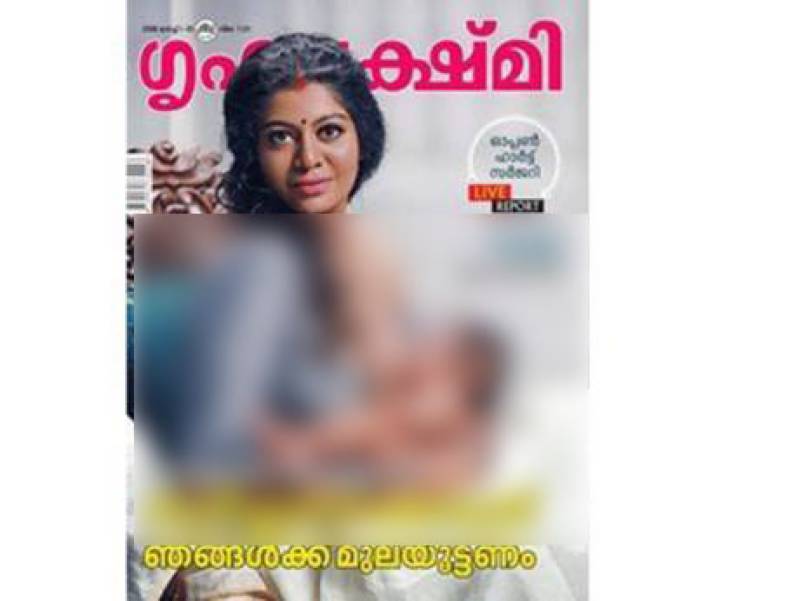 Dubai (Web Desk): Gilu Joseph, an actor-poet and former cabin crew member in Dubai, who featured on the polarising cover of a South Indian magazine as a mother breastfeeding her baby, has defended her photoshoot and called it her contribution in removing the stigma attached to nursing in public, Gulf News reported.

Her intention was solely noble and aimed at a worthy cause, said Joseph about her first magazine photoshoot in her life. “I didn’t see anything wrong with what I did … I am trying to take every controversy coming my way in my positive stride …And I  don’t regret my decision to be a part of such a noble campaign,” said Joseph in Malayalam, in an interview with Gulf News over the phone from Kerala.

The March cover of Grihalakshmi, a women’s magazine published in Kerala, with the headline ‘Moms tell Kerala - don't stare, we want to breastfeed’ has triggered an uproar after it published the 27-year-old unmarried Joesph staring into the camera with a baby on her chest.

The photoshoot, that has been embraced, praised and lampooned in equal measure, has triggered debates on whether the magazine’s breastfeeding campaign attempts were progressive (Unicef India also tweeted their support and lauded their efforts), tawdry or morally reprehensible.

“There are a lot of people who thought I was wrong because of the title or due to my expression. I sincerely wish they would go through the magazine where I have written an article that breastfeeding is absolutely normal and a beautiful thing. There’s nothing wrong with it and please let us not reduce my photoshoot as something vulgar. Our soul is so much beyond that. Let’s not lock our body in shame … I am not saying that you should breastfeed in open tomorrow. That was not our message or intention.”

“All we meant to do through the photoshoot is to tell every mother that you are doing something beautiful by nursing your young ones. And if at any point, a mother is not able to find a corner to feed your crying child, there’s nothing wrong in feeding them in open,” said Joseph.

Joseph, who worked in Dubai as a cabin crew member with FlyDubai from 2008 to mid-2017, was born in a small town called Kumily in Idukki district in South East Kerala to a farming family and has featured in several Malayalam films. Her thirst for adventure and travelling prompted her to pursue a career in aviation. But the certified scuba diver and a poet quit her job as a Dubai-based cabin crew in mid-2017 to pursue her love for arts, cinema and travel.