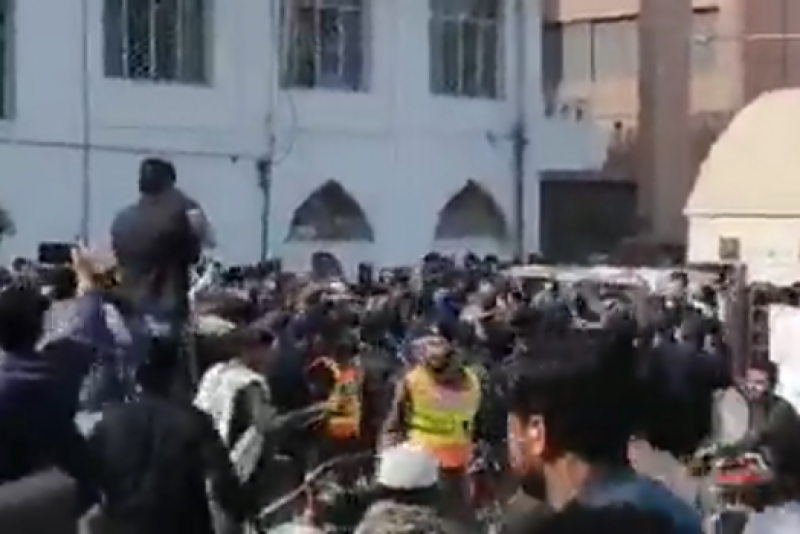 Peshawar: (Web Desk) At least 56 worshippers were martyred and more than 190 were injured in a  suicide attack on a mosque in Qissa Khwani bazaar in Peshawar's Kocha Risaldar area on Friday.

Police and rescue teams reached the site of the explosion and cordoned off the area.

The injured were shifted to Peshawar's Lady Reading Hospital, where the condition of some victims was said to be critical.

According to Khyber-Pakhtunkhwa (KP) government spokesman Barrister Mohammad Ali Saif, at least 56 people had been killed in the explosion, which he said was a suicide bombing. He added that two terrorists were involved in the attack.

Inspector General (IG ) KP said that it was a suicide attack and at least 150 ball bearings were used in the suicide vest. He added that the attackers were on foot when they attacked the police guards and the imambargah.

An initial report by the Bomb Disposal Squad (BDS) confirmed that the explosives used in the attack weighed around five to six kilogrammes and were homemade. Ball bearings and other shrapnel producing material were used to maximise casualties among the worshippers.

Earlier, Capital City Police Officer (CCPO) Peshawar Ijaz Ahsan, the initial reports reveal that two attackers tried to enter in the mosque and fired at the policemen standing guard. As a result, one policeman was martyred while the other was critically injured, the CCPO said.

Lady Reading Hospital's spokesperson stated that more than 30 bodies had been brought to the hospital so far.

The spokesman said that Lady Reading Hospital had been put on red alert and more medical personnel have been called to the hospital.

The area has a number of markets and is usually packed around the time of Friday prayers.

President Dr Arif Alvi condemned the incident in a statement and expressed grief over the precious lives lost.

He expressed sympathy with the families of the departed and also prayed for the recovery of the injured.

KP Chief Minister Mahmood Khan condemned the blast and sought a report from the KP inspector-general of police.

The chief minister instructed the rescue workers to speed up the rescue operation and ordered provincial cabinet members to monitor the operations.

Interior Minister Sheikh Rashid also condemned the attack, saying he had directed the provincial chief secretary and inspector general of police to submit a report. He expressed grief over the lives lost in the incident.

Pakistan Muslim League-Nawaz (PML-N) President and Leader of the Opposition in the National Assembly Shehbaz Sharif offered condolences to the families of those martyred in the attack.

In a statement the PML-N chief strongly condemned the incident saying those who attacked worshippers could be "neither Muslims nor humans".

He also expressed concern over the "serious security conditions" in the country.

In a post on Twitter, he wrote, "Words can't adequately condemn the sheer brutality. Terrorism continues to remain our foremost national challenge".

Former President Asif Ali Zardari also condemned the incident and said terrorists were the enemies of the country and the nation and must be eliminated. While praying for the speedy recovery of the injured, he reminded that there was still time to fully implement the National Action Plan.

The former president said that the attack would not have happened if "nurseries of terrorism had been destroyed".

He demanded that the government immediately arrest terrorist elements and their facilitators.

PML-N Vice President Maryam Nawaz also strongly condemned the incident, stating that the "return of the smell of explosives" in Pakistan's cities was worrying.

"The peace that was established by sacrificing precious lives has been affected by incompetence," she said referring to the current government. She prayed for the injured and the families of the martyrs.